Expat kiwi Scott A Young is a man of many pseudonyms - and talents, both serious and comic, as a writer, filmmaker and actor. 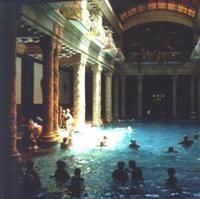 Budapest, Hungary, a place of definitions; for in many ways it is the point where east meets west. Hungary can properly be considered part of the Balkans, but Hungarians (or Magyars), like to stress they are part of Central Europe; or Mittel-Europa as it was known during the 'Golden Age' of the Austro Hungarian Empire. Still, the Eastern influence remains. The Turks held Budapest for 145 years and, among other things, revived and enriched the culture of spa baths - begun by the Romans centuries before. Modern day Hungarians retain an unquestioning, touching faith in the curative powers of thermal waters. The baths are Budapest's aquatic museums - and its public houses; from the pot bellied retirees playing floating games of chess midst the neo-baroque riot of Széchenyi baths - to the muscle bound hunks and voluptuous ghetto princesses that gather at Cinetrip, a regular dance party held in Rudas, the 15th century Turkish baths. Something of the mosque, the minaret and the odalisque remains even in the city's gorgeous, late 19th century architecture, a breath of Byzantium among all the Art Nouveau. 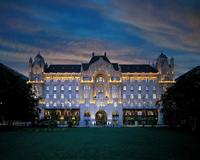 She's been knocked around a bit too - this twin city (Buda and Pest, d'you see) touted as 'the pearl of the Danube' by ambitious tour guides and holiday brochure copywriters. A siege over Christmas 1944 when the Red Army pounded the city with artillery, and the street fighting that followed left whole neighbourhoods still pockmarked with bullet holes and artillery fire. During Soviet rule, anyone who cared a fig for old standards of aesthetic beauty probably kept their mouths shut. The magnificent Gresham Palace, facing the stone lions on the Chain bridge, was turned into a low-rent housing project. Now, fifty years of neglect later, the building has reopened as a Four Seasons Hotel. 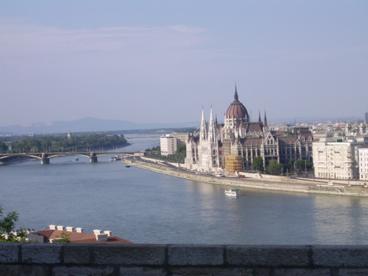 Not that Budapest lacks physical beauty: the city has that in spades. On a fine day, a stroll around the castle district and the palace of Emperor Sisi, with its views of the Danube, can lift all but the most moribund of spirits. If that fails, a dessert in the Gerbeaud or Central Café will transport you gently back to an era of boaters and parasols, corsets and walrus moustaches, to a time when literary movements founded in cafés still believed they could shake the world. Pulchritude of a different kind can be found in the city's legendary 'cabarets', or even just by sitting in a café and watching the world in her miniskirt parade by. Blonde or raven-haired beauties, tanned and curvaceous, muscular and sexually confident - and all speaking a tongue that sounds not just foreign, but alien; like some made up language for a television science fiction programme. 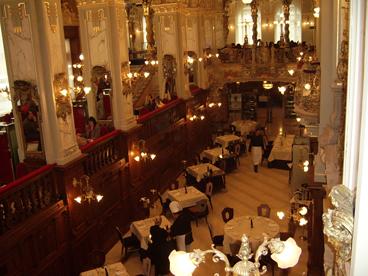 Perhaps what has held me so long, and I have been here off-and-on more than half a decade, alongside the city's likeable earthiness, and practical concerns like a low cost of living - very practical for a low budget filmmaker - is the sheer impenetrability of the place. The strange has not become familiar. Take the language, infamously difficult to learn. Skilled jesters struggle to describe the strange cadence and rhythms of the Hungarian language, 'Yoda on speed' I heard someone say somewhere. Their Finno-Ugric language is so singular, its only distant relatives are Estonian and Finnish, and only a few common hunter-gatherer terms survive in all three tongues: indeed English and Russian are said to be closer. (So don't come here thinking that your Estonian and Finnish will take you very far).