Insights from Kevin Roberts, Worldwide CEO of Saatchi & Saatchi and passionate advocate for New Zealand.  Kevin posts every weekday on his blog, sharing thoughts and exploring innovations in media, business and life from around the world.

I just spent three days in one of my favorite cities – Buenos Aires. I was speaking to 2,000 executives about the future of brands in this tough economic environment, as well as catching up with the MBAs at the Universidad de Palermo.

I stayed at an old favorite hotel, Alvear Palace, one of the Leading Hotels of the World. It has a great French restaurant, La Bourgogne, terrific spa, and a great location right next to hustling, bustling Recoleta. 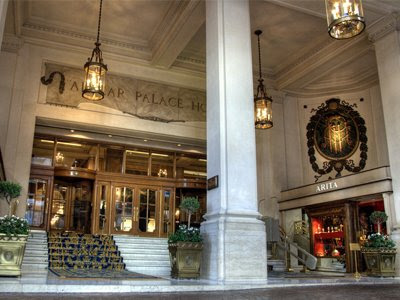 I arrived on a Sunday when the market was open and it was terrific to walk around the hundreds of art and crafts stalls. Later that evening, I dropped in to La Biela on Quintano, a century old bar where you can sit underneath a huge Ombu tree on the sidewalk and drink fresh Malbec wine. Then it was on to a special evening with HSM’s CEO, Eduardo Braun. He invited us to a beautiful Palermo loft where we were entertained by a wine tasting from Michel Rolland and tango experience complete with singing, dancing and lessons from Eduardo!!

In my mind, Buenos Aires is the world’s hottest city. The architecture and layout are based on Madrid and Paris and the wide boulevards are just a delight to walk. In fact, 9 de Julio Avenue is 140 meters wide. One of the widest in the world. The city is a great contrast of funky nightlife, tango mythology and tradition.

My favorite area is Puerto Madero, where I stayed in April with Bex. It is reminiscent of the Butler's Wharf redevelopment in London by Tower Bridge (where I lived when I first joined Saatchi & Saatchi in 1997). There, we stayed in a funky boutique hotel, Faena Hotel+Universe, designed by Norman Foster and Philippe Starck. It covers the coastal strip from Retiro to La Boca with its old buildings restored into bars and restaurants. La Boca, of course, is home to La Bombonera, the stadium of Maradona’s (the new national team coach) Boca Juniors, the most popular soccer team in Argentina. Watching this working class team play its more upscale rivals, River Plate, is not for the faint hearted.

Close by is Malba, the Museum of Latin American Art of Buenos Aires. A few years back I was fortunate enough to host a Saatchi & Saatchi reception at the museum, which contains one of the best Latin American art exhibits in the world.

The nightlife in Buenos Aires kicks off at midnight and goes to 8:00am. Puerto Madera, Costanera Norte, are famous for their steaks, fresh red wine and parilladas (barbecues).

There is no more interesting place to visit nowadays than Buenos Aires. The shopping is outstanding and the prices are low. From there, of course, you can head to Patagonia, Iguazu, Mendoza or Cordoba, and it’s only a hop to nearby Punte del Este in Uruguay, the Hamptons of Latin America. Argentina delivers beaches, mountains, deserts, woods, forests and ice.

I’m going to take a couple of weeks here one of these days.