Josh Barlow is a well known chef on New Zealand’s flourishing food scene. At 29, he is currently Head Chef at the The Grove in Auckland, one of New Zealand’s top restaurants. 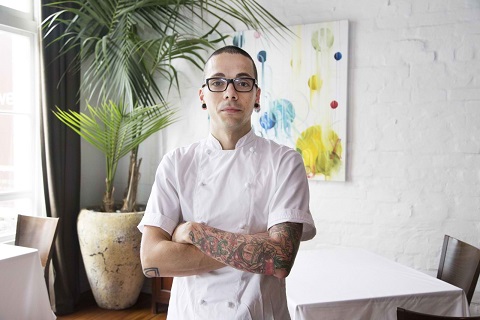 Last year, Josh travelled to Tokyo, to film a Vice documentary with Tokyo Dry, which saw him merge his Kiwi experience with Japanese ingredients and inspiration. Alongside local chef Nori Tsugawa, he produced dishes that were later served at Nori’s restaurant, Shitorasu.  Despite the language barrier the two chefs shared the same approach to food. With both insisting on amazing fresh ingredients, sourced locally.

When did you decide cooking was something you wanted to pursue?

For as long as I remember cooking has been the only thing I’ve wanted to pursue as a career. Being in the kitchen never gets boring and there’s always something new and exciting happening. As they say, Do what you love and you will never work a day in your life…..

Use everything. If we get whole fish or whole animals into the restaurant we always make sure that nothing goes to waste. It’s our job to use everything we can out of respect to the animal or plant.

What was the highlight of your trip to Japan with Steinlager Tokyo Dry?

Having the opportunity to be shown into the restricted areas of the Tsukiji fish market was just unreal. The quality and the huge selection of different and interesting really made me stop in my tracks and appreciate where I was standing.

Being able to spend the night with Nori in his kitchen at ‘Shitorasu’ was eye opening. It was amazing to taste the way he prepared everything and how simple it was. Yet there was so much skill and love involved so it really took humble ingredients and simple dishes but made them taste next level.

Do you draw inspiration from other cuisines/countries around the world?

I love reading cookbooks, reading about food and interesting ingredients and how we can use them in our style of cooking.

Just wish I had more time to get involved in all the books I haven’t even opened yet!!!

Is there anything you wouldn’t/don’t eat?

Can’t eat eggs on their own. Can’t stomach them for some reason. Even the smell of them.

Favourite spot for a coffee?

At home with the family on a Sunday morning.

Which 5 guests (dead or alive) would you invite to a dinner party?

What advice would you give to someone who’s a little apprehensive about taking on your recipe/cooking at home?

Challenge yourself to try something new. Cooking is all about having fun and broadening your knowledge. Recipes are only guidelines. You have to get to know them and then you can start putting your twist on them. That’s when it starts to get proper fun

Where do you see yourself in 10 years time?

In a kitchen somewhere doing what I love. Cooking.

If you were a superhero, what would your powers be?

Favourite watch on netflix at the moment?

Black Sails. (That’s on lightbox though)… So gutted that its finished. Most of the time I spend half an hour looking for something to watch then just give up and either go to bed or watch Moto GP racing instead. (If I wasn’t a chef I’d wish for the talent to race motorbikes for a living.