This is a gorgeous smoked salmon recipe that uses scalloped potatoes, wilted bok choi, and a lemon, capers and dill cream sauce. We used Regal's wood roasted smoked salmon portions for this recipe. 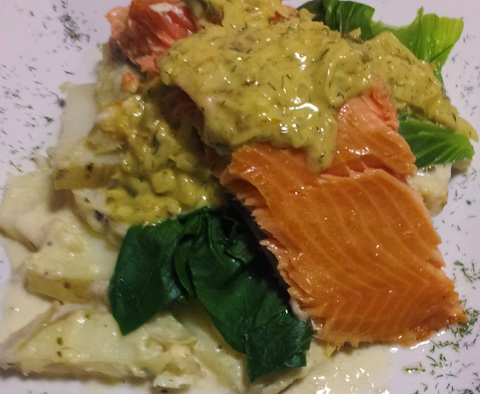 - Salt and pepper to taste

Semi-cook the potatoes (either in a microwave to save time, or by boiling) then slice then thinly and layer in an oven-proof baking dish with the chopped half onion and garlic. Mix the cream and milk with cheese, and pour over potatoes. Place in preheated oven at 180 degrees.

While this is thickening place salmon fillets in oven under the scalloped potatoes rack.

While the salmon is warming through, place Bok Choi in a boiling pot of water for a couple of minutes.

When plating place scalloped potatoes on plate then the wilted Bok Choi, then the salmon fillet and generously top with the cream sauce.