Domino’s have released a new range of pizzas called “Chef’s Best” pizzas. Since pizza is often the go-to takeout when grabbing some dinner with friends, mostly because of its price, we thought we’d try out the range. At $8 each, the pizzas are a little more expensive than your standard Domino’s pizza, but still a bargain. I tried Domino’s Chicken & Camembert Chef’s Best pizza to see if it would live up to the expectations given to me by the rather delectable looking picture below: 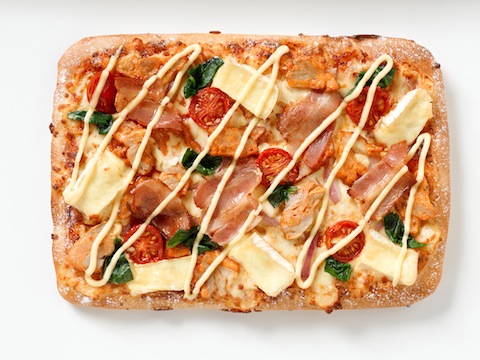 Toppings include seasoned chicken, camembert, rasher bacon, baby spinach, cherry tomatoes, red onion & mozzarella topped with hollandaise. Chicken and camembert are always a great combo, probably because the creamy camembert makes up for chicken’s tendency to be a bit dry. I really love adding spinach to anything with cheese, because they much such a great combo too. The toppings were really high-quality, meaning that instead of the pizza tasting like the generic pizza flavour, each ingredient could be enjoyed.

The best ingredient of the pizza though, and what really made it worthwhile however, was the addition of the hollandaise sauce. It really joined all the flavours together, making for a really enjoyable meal.

The idea of the range is that they deliver more for less, and at only $8, I enjoyed a premium pizza without the premium price tag.