Okay, so this one was hard to name. Every title I came up with made it sound… well… simplistic. The ingredients and preparation are both simple, but this belies its tastiness.

How to make Lemon tuna steaks on roasted veggies 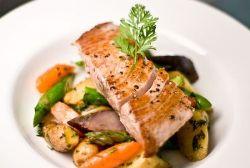 Place the Tuna steaks on a plate and drizzle a good helping of EVOO on them flipping a few times to make sure they are well coated. Sprinkle with black pepper then rub the cut side of the lemon zest into the steaks (do not salt them yet).

Heat the oven to 400 degrees F and prep the veggies. For the carrots, make one cut at a 45 degree angle, then roll it 1/4 turn away from you then make another cut at the same angle. I’m not sure what this cut is called but it’s great because it makes all the pieces of the carrot roughly the same thickness (which you control by how far apart you cut) so they cook evenly. I used a variety of long skinny potatoes and cut them up the same way. Then just toss the carrots, potatoes, and garlic in a good amount of EVOO, salt and pepper. Put this in the oven for about 40 minutes or until the potatoes are almost done.

Add the asparagus and carrot leaves, toss adding more EVOO if it looks like it needs it then put it back in the oven.

Now it’s time to cook the steaks. Heat a heavy bottomed stainless steel or cast iron pan over medium heat until very hot. Remove the lemon zest and discard. Flip the steaks over a few times to make sure they’re well coated in oil then sprinkle with kosher salt on both sides. Place the steaks in the hot pan and do not disturb them until they are ready to flip. You’ll know they’re ready when the bottom third of the steak is brown (the top 2/3’s will be red). If the pan was hot enough and they’re ready to flip, they should be fairly easy to dislodge and turn with some tongs, but if they are sticking use a spatula. Cook this side until the bottom 1/3 is brown (now the bottom and top thirds should be brown and the middle 1/3 should be pink, not red).

Take the veggies out of the oven after flipping the tuna and plate the veggies. When the tuna is done, put them on top of the veggies right away so they don’t overcook. Drizzle 1 tsp of lemon juice and 1 tsp of EVOO on each steak and serve immediately.

This work is licensed under a Creative Commons Attribution-Share Alike 3.0 License.