The history of swimwear 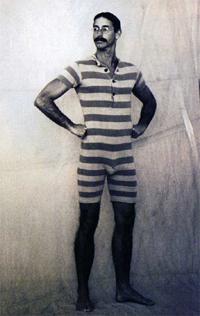 It has been a bit of a round-about journey for men’s swimwear, from the 9 pound Jantzen suit of the early 1900s to the less modest Speedos and back to the dependable, high coverage boardshort. Frank swims back in time…

The swimsuit begins its history in ancient Greece and Rome. In these ancient civilizations, public bathing was a common and popular tradition, although on the whole men bathed in the nude. By the fall of the Roman Empire, public bathing and the accompanying swimwear worn by women fell out of style for several hundred years. During the Middle Ages in Europe, men and women rarely bathed, in fact public bathing was viewed as immoral and unhealthy. When public bathing returned to popularity in the 1800s, cozzies for both sexes were somewhat similar in appearance. Women wore dresses and men wore shirts and shorts, ending at the knee and covering the arms. 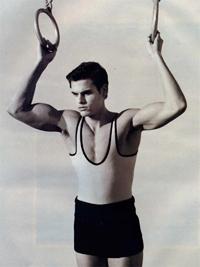 Until the 1920s, most swimwear was made of knitted woolen materials that were extremely heavy when wet and flouted the safety values we prize so highly in this water-encased nation of ours. But gradually suits became tighter fitting, and materials used chose swimming speed over modesty with outfits made of lighter and more comfortable silk.

But manufacturers still had to consider standards of public decency when creating a costume that was attractive and comfortable. Until the early 1930s, it was still considered tasteless for men to bear their chests. In 1933, convertible-style suits with removable tops wearers the option to go bare, although this frequently led to arrests for indecent exposure.

Thankfully, society became a little more relaxed when Olympic swimmer Johnny Weismuller promoted the first pair of bathing trunks. In an effort to gain acceptance, the company who made them tried to give them a more dressed look with a simulated fly front and belt buckle effect. In 1937, men finally won the right to go topless and the public's concern with nudity began to erode. 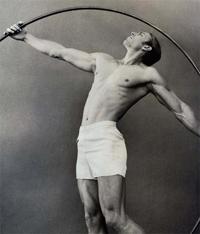 In the 1940s boxer style shorts became the typical swim wear for men, but the 1946 introduction of the bikini threw the swimsuit fashion world into a frenzy, and men didn’t want their bathing costumes to be outdone on shock factor. The result was an explosion of colour, patterns and fancy detailing. Although tighter, high waisted, underwear-like suits were popular, bright ‘Cabana’ sets of matching boxer trunks and shirts remained the usual beach attire through until the 1960s. 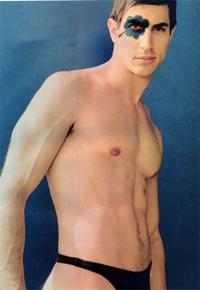 The sexual revolution and rise in popularity of competitive swimming in the 1960s saw a huge revolution in swimwear. Realising that mere fractions of seconds could be the difference between Gold and Silver medals, the Amateur Swimming Association commissioned a report into the issue of drag caused by swimwear – and the resulting competitive costumes were specifically designed to reduce friction while moving through the water. The fashion world followed suit, (no pun intended) and men’s swimwear got smaller and smaller.

The 1970s marked the beginning of a period during which no modesty was considered. A return to an obsession with physical fitness and body building in the 1980s continued this trend, with slightly more flashy colours returning to favour. Few style changes were made until the popularity of Calvin Klien’s boxer briefs and the rise of surfer culture in the 1990s made the board short popular again. 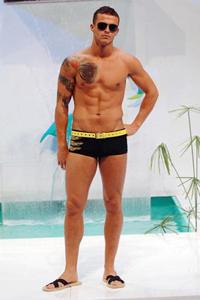 Today, men’s swimsuits come in many varieties. Board shorts remain the most popular for casual wear, while competitive swimmers focusing on tight, all-in-one bodysuits designed to mimic the movement of a shark and facilitate speed.

But men’s swimwear seems to be on a backwards trajectory, so perhaps it won’t be long before nudity is once again en vogue!