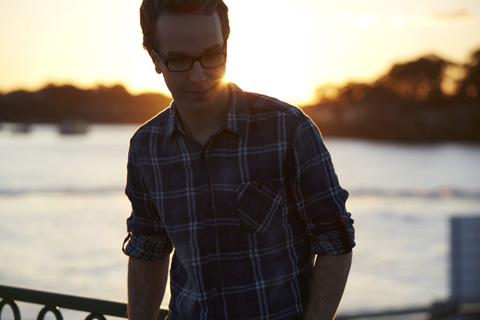 Alistair, you’re the head designer for Bing, Harris & Co, tell us how this came about?

It started off very casually. I was called into a meeting, shown the Bing, Harris & Co. branding and asked what my thoughts were. I said I liked it as it had a nice heritage feel but at the same time is very current looking. After that I was basically asked if I wanted to head up the brand as the head designer. It's not everyday opportunities like this come around! Lucky I said I liked the branding…

When designing this summer's collection, what kind of guy were you designing for?

I had a picture of a young guy with the world in front of him, free spirited and effortlessly cool. He is on summer break and exploring all that life has to offer. Cheeky, suave and knows how to have a good time!

What were your main sources of inspiration for your first collection?

I was inspired by photographers Slim Aarons, 70s Actors Steve McQueen & Dustin Hoffman who were so freaking cool! Palm Springs pool parties in the 1970s, or beach parties in California. I had the feeling of a bright fun summer with washed back sepia tones from photos of that period

What are your favourite pieces in this summer’s collection?

I did two IKAT printed shirts on a really fine 80s count cotton poplin which I love, they are bold but still look really stylish on. I also explored a few vintage wallpaper stores in LA where I found some really great designs which I translated into printed cotton shorts. I did four different prints and they all look pretty sweet, I am actually about to put in an online order for them now as it's heating up over here in Melbourne this week!

What’s your favourite thing to do after a hard day at the office?

I have two little boys Lachie & Ollie and getting home after a hard day and seeing them run up the hall like it's Christmas just cause I'm home is the best feeling in the world. They are amazingly creative little kids and they inspire me every day.

What designers and personalities have most influenced you and your fashion career?

My main inspiration comes from designers like the late David Hicks who did the most amazing geometric wallpapers & interiors, Slim Aarons who had the privilege to photograph the rich and famous in 1970s California (what a job!), Architects like Richard Lautner and Julius Shulman who designed without regard for convention. Google Arango House and you'll see what I mean. These guys loved what they did and still inspire & push the boundaries decades later. That’s what gets me amped!

Where will we find you this weekend?

Down at the beach house, going for an early morning surf then grabbing coffee with Fi & the boys and taking them down to the beach

I love a good coffee, so much goes into getting a decent cup of joe, it's becoming a science, not unlike wine, so much to learn and so many variables. Also the culture that has grown around the humble bean is great to watch evolve.

Alt-J, Asta, Alpine, Ash Grunwald and that’s just some of the A's. I love music and have a pretty broad spectrum of what I listen to. Mixing the playlist up keeps me going on the late nights in the office and design studio.

Sleeping… Ha. Nearly the truth but I do like to get out with mates for a weekend ride in the mountains, ski when there’s snow or go for a surf. These things help me to switch off.

Today I’m most grateful for…

Oh that’s a simple one - life. I am stoked to be alive and doing what I do. I work with a great bunch of people, have good mates and a supportive family.

If I could change anything in history I’d….

Ever watched the Butterfly effect? My list would be a mile long of things I wished I could have changed but then who knows what would have happened once one event gets stopped the next event might have been worse?