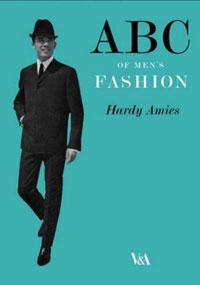 ‘A man should look as if he had bought his clothes with intelligence, put them on with care and then forgotten all about them.’

For all men – and indeed all women who are interested in men’s clothes – this alphabetical guide to men’s fashion is written with writ and expertise. From the etiquette of dressing to the meaning of technical terms, Hardy Amies’ skilful eye guides you safely through style decisions on everything from blazers and brogues to skiing and sandals – all with a bitingly dry sense of humour. No man can afford to be without this classic style bible. Despite first being published in 1964, the rules of classic, stylish dressing still apply today. A few gems Amies imparts include:

American Styling
American Styling has made two important contributions to men’s fashion. First jeans. These are popular everywhere with young men – even on remote Greek Islands. Men of all ages wear them for work and play. They have done much to affirm the general tendency towards narrow trousers of all types. The second contribution is more of an attitude towards dress. The American seems to have a horror of being different; except in play clothes where he is quite happy to be a horror.

Bell-bottom
The shape of sailors’ trousers where they meet the boot. Attempts to bring this shape into civilian clothes have been unsuccessful. 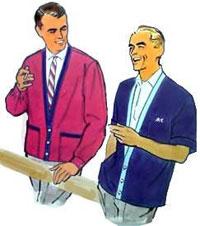 Irish Linen
Linen is a fabric made from flax fibres, and there is no question that the Irish make the finest. It is an attractive material for far more things than just tablecloths and sheets.

Knitwear
This is an unpleasant name for a very pleasing category of garment; but I suppose Knitted Wear sounds pretentious.

Normal Figure
There is no such animal. You may be ‘stock’ size, but it is 99% certain that you will have some idiosyncrasy of figure that makes you not abnormal, but individual.

Shoe Tree
In a well-kept shoe cupboard you should not be able to see the wood for the trees.

Underwear
Should be as brief as wit and as clean as fun. 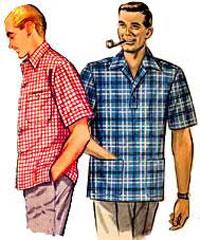 Young Man
Today a boy becomes a young man at fourteen and remains one at forty. He is therefore a very important customer, especially when he insists on having the right to spend a large part of his money on clothes. He feels this is the easiest way available to him of expressing himself. It is sometimes more than vanity: it can be a demonstration of revolt against traditions and habits, the subservience to which he feels has not made the world the happy place he thinks it should be. In the 19th century the young man openly copied the clothes of his elders. In the twenties he grew a moustache in an attempt to look mature as quickly as possible. Today, from the cut and length of his hair down to his narrow trousers and boots he wants to look as young as he can: and starts at 25 to feel the first pangs of depression at being middle-aged. The young man thus rules the man’s fashion realm. In fashion today there are no old men: only the young and the dead.