Whiskey is a drink in which many people love to indulge. Attracted to all sorts, people find themselves filling up their flasks, ordering another round, and telling bottles that they are their water of life. Whiskey, quite simply, is among the most lavish of liquors: ordering a glass always raises the bar.

Yet, there are some people who have never tried whiskey, some unfortunate souls who frequently indulge in only tequila or vodka. It's not these peoples' faults, we must not go after them in some sort of Whiskey Rebellion. Whiskey, instead, is to blame: after all, this is one drink that is intimidating to the novice.

Not only does whiskey demand a certain sophistication, like a drink that rolls its eyes in the direction of light beer and one that refuses to sit anywhere other than the top shelf, but it also comes in an overwhelming variety.

The following list offers the novice a little help as it showcases the different types of whiskey: go ahead and drink it in. 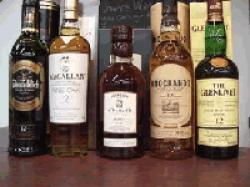 Scotch Whiskey: These whiskies tend to answer to their first name: Scotch. Scotch is whiskey that is distilled in Scotland (a whiskey wearing a kilt is a sign of validity). They are typically distilled twice, but may be distilled three times. Scotch must be aged in oak casks for at least three years.

Scotch can be made from malted barely, unmalted barely, other unmalted grains or a mix. It can also come from a single distillery, or several. Regardless of the type, Scotch is well liked among drinkers: in many peoples' opinions, it malts in your mouth and not in your hand.

Japanese Whiskey: Initially, the Japanese took a page from the Scotch playbook and attempted to recreate the same whiskey in Japan. However, because the ingredients used in Scotland weren't widely available, they were forced to deviate from their original plan. Still, Japanese Whiskey does a good job of carrying on the traditions introduced by the Scottish, it just tastes different.

Japanese Whiskey typically does not contain wheat or rye (two ingredients essential to many types of whiskey), and is instead made using millet, rice, and corn. Their whiskey is also initially fermented in a fashion similar to that of their sake. This produces a drink with an innovative taste fit for a king, or at least an emperor.

Irish Whiskey: Irish Whiskey is a whiskey made in Ireland (who knew the Irish drank!). It can be produced a variety of ways, the most unique being in a pot. Pure pot still whiskey, available only from Ireland and made completely with barley, has a spicy, different, and highly sought-after taste. 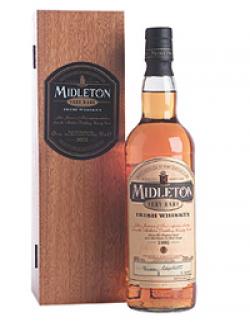 So there you have it: round one of the whiskeys (yes, this round's on me). Stay tuned for round two where we will discuss Indian Whiskey, Canadian Whiskey, and American Whiskey. In the mean time, the above whiskies should keep you busy, and keep you satisfied.