Ben Andrews is the Beam Whisk(e)y portfolio Brand Manager and has the job many men dream of. Young, driven and enthusiastic, Ben gives Get Frank an insight to his portfolio, the industry and how he balances his professional and personal life. 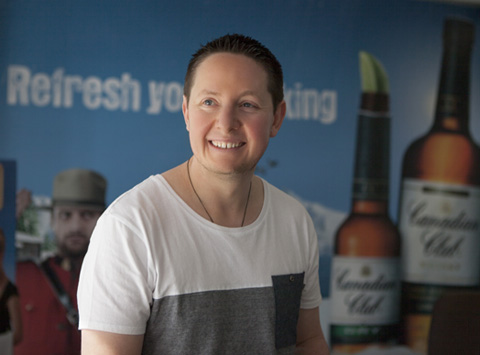 What is a usual day on the job like for you?

More computer work than I would like! Creative meetings with internal colleagues, agencies and external partners probably take up 50% of my time, I try to block out time to touch base with reps, social media responses and promotions in trade. It might sound like a line, but I like being hands on with my brands and try to live the brand through the eyes of a consumer, I think marketer’s can easily become trapped with ideas from a glass box somewhere in the city and forget what a consumers reality is.

You must do a lot of socialising – how does it fit in with your personal life?

I have a very supportive fiancée who is only too happy to come along and get stuck in with brand activations, so that helps. I try to maintain the elusive balance between gym, friends, family and work. It’s gotten to the point where I have to block out a weekend once every couple of months just to relax, but who can complain? I work in the greatest job in the world!

Your industry has faced a number of hurdles over the past few months – what has this taught you?

To be patient, legislation is part of any industry and ours happens to be in the spotlight currently. Beam takes social responsibility seriously and we have a number of our values written up on our walls to remind us that this is a living breathing concept, not just a slogan.

Many men would love to be in your position, working for some of the worlds’ most recognisable brands – do you have any tips for those wanting to get into the industry?

Study hard, work hard, and be personable. I’m always the first guy to shake a hand, meet a new person and smile at the people I work with. If I was recruiting, I could think of nothing worse than a boring person with a limp handshake telling me about all their work experience – have some passion for life and the brands you work for! People are often stunned when I let them know what I do at my age, they think I must have won the lottery – and in a way I agree with them, it’s a great place to be in life when the alarm goes off and you are genuinely happy to get up and see what the day brings.

Do you have a career highlight?

In 2010 we ran an on pack promotion with Canadian Club to ‘Win a resort in your backyard’, a ridiculously cool package of cedar spa, custom outdoor cabana with grill and fridge, loungers, towels and umbrellas etc. I then had this idea to take the promotion from traditional web or txt only to social media, we created two of the kits and the winners of the promotion got to keep the kit in their backyard for 6 weeks, then compete on facebook against each other to get the most ‘likes’ for their C.C. backyard kit and keep the gear forever. It just went totally viral, I remember planning it with the agency and we hoped to gain a few hundred likes on Facebook with no media spend, it ended up generating around 16,000 new likes, had people emailing/ phoning me constantly and made local news for the winners. Sales of our premium RTD’s doubled in a year, so it was pretty good times.

What’s the difference between Whiskey and Whisky?

I love this one, it pertains to the country of origin and their history. The easiest way to remember the difference is a little rule ‘if the county it comes from doesn’t have and ‘e’ in it, then neither does the Whisk(e)y’. Ie: Scotland – no ‘e’, America – ‘e’. Definitely one to pull out at the next dinner party and look like you know your Whisky.

What’s the best advice anyone has ever given you that has helped you progress in your years at Beam Inc.

Be yourself, I’ve got a great boss who is a crazy text book ‘marketer’. He’s always said to me, be yourself, that’s why I hired you, push the boundaries.

Is there an etiquette to drinking Whisk(e)y?

A man that I highly respect Fred Booker Noe III, the 7th generational son of Jacob Beam (founder of Jim Beam), came to New Zealand to conduct a tasting and we were trying a very high end small batch bourbon ‘Bookers’ that I would relate to a fine single malt. Someone from the crowd asked him ‘Fred does it annoy you when you take so much time to lovingly craft this whisky and some guy pours coke on top of it?’ he paused, looked him in the eye and said in a great Kentucky drawl “well I would say to that guy, that he is drinking the best damn bourbon and coke in the world!”. I like that way of thinking, times have moved on from whisky being sacred from mixers.

What is the best thing about your job?

Freedom to be different with world class brands, 90% of what I do is local marketing, thought up by very clever people right here in NZ.  I think we have some of the best people in the world for marketing and we prove it time and time again with our award winning campaigns and ideas. My boss loves the famous quote ‘we had no money, so we had to think’ – I reckon that sum’s up kiwi’s a treat, we never have the biggest budgets, but we sure have some of the best ideas.

Whisk(e)y has been around for centuries, where do you see the Whisk(e)y industry heading in the next 100 years?

I think the outlook for whiskey is very strong, you have many varieties that are performing particularly well. When most people think of Whiskey, they think of scotch or Jim or Jack. But there is great variety’s from Ireland, Japan, Canada and more. With the global trend towards vodka, particularly in the western world I see lighter, easier mixing Whisky staying strong – Irish and Canadian. In terms of single malts Scotland still dominate and literally cannot produce enough for the demand with emerging markets in Asia in high double digit growth. South America and India with huge population growth love a strong tasting Whisky and Teacher’s is growing there at a phenomenal rate, on top of that American Whisky is growing around the world – so pretty bright I would say!

As a brand manager, what would be your dream marketing campaign?

One that takes on a life of its own and becomes bigger than what you ever set out to do. I love the way that mastercards ‘priceless’ campaign has turned into a global T-shirt phenomenon, I think it must be like a musician writing a hit song – you know when you are on to something good, but you can never quite predict when something will blow up massive.