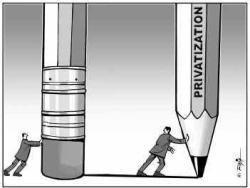 With the National Party’s decision not to move any state-owned enterprises to the private sector in its first term if elected this year, we appear to have a new political consensus between the major parties in New Zealand: privatisation is bad.

This contrasts with the earlier consensus that privatisation is good. A few years ago the World Bank observed that “Privatisation is now so widespread that it is hard to find countries not using the approach: North Korea, Cuba and perhaps Myanmar make up the shrunken universe of the resistant.”

Clearly the World Bank had not noticed New Zealand on the map. Indeed New Zealand has done even more to stand out from the crowd: it has gone in the opposite direction with the buy-back of Air New Zealand and now the railways and ferries, the establishment of Kiwibank, the renationalisation of ACC, and the Auckland Regional Council’s reversal of the part-privatisation of Ports of Auckland.

Some people associate privatisation with right-wing politics because it was first initiated on a large scale by Margaret Thatcher’s government in Britain. But this is mistaken. In opposition, former British Labour Prime Minister Tony Blair fought and won a pitched battle against his party’s longstanding attachment to “public ownership of the means of production, distribution and exchange.” 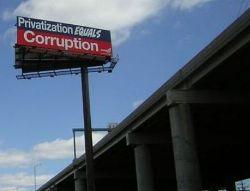 Last year a British MP wrote, “Now that Blair has been and gone, you would struggle to find a serious politician in any party who would advocate state ownership of any industry as a 21st-century model. Indeed the idea of the state running our utilities, airlines or railways now seems archaic and even faintly ridiculous.” Utilities (like electricity), airlines and railways? Ridiculous? Apparently not in New Zealand.

The position across the Tasman is also instructive. All governments at federal and state level are Labor, and none is opposed to privatisation. Currently the New South Wales government is battling with trade unions to privatise its electricity generators. Victoria did so in the mid-1990s, and in the five years to 2007 electricity prices in Melbourne have risen by less than one-third as much as in Sydney.

The government of West Australia is looking at private ownership of its water utility and the Queensland government is selling airports and entering into public private partnerships to build schools. Australia has private prisons and many infrastructure PPPs. At the federal level, Australia Post is the only major business not yet privatised. Postal services have been privatised in social democratic Germany and the Netherlands.

Privatisation has been an important factor in Ireland’s economic success. No privatised enterprise has been renationalised in Ireland. The worldwide moves over the past 25 years to move state enterprises into the private sector have been driven by the evidence of major economic gains in the form of improved efficiency and profitability, lower prices and better services, and more investment and output. This does not mean that all private businesses are success stories and all SOEs underperform. Rather, the point is that, on average and over time, the private sector is better than politicians at running commercial businesses, and governments should not bet against the odds with taxpayers’ money. 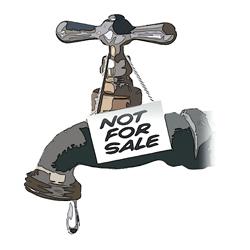 The picture in New Zealand is similar. Corporatisation and privatisation contributed to the surge in productivity growth in the 1990s. Productivity growth has slumped since 2000. Out of some 30 privatisations, criticism focuses mainly on just two alleged ‘failures’, Air New Zealand and Tranz Rail. Even if true, these criticisms would not weaken the general argument that most privatisations have been successful, but arguably the government did not need to get involved in either case.

Myths about privatisation still abound. The idea that ‘corporate interests’ want to get their hands on SOEs makes no sense. An acquisition of an SOE is just like any other acquisition: in hindsight, some transactions will work out better than expected and some won’t. Fletcher Challenge clearly over-paid for the Forestry Corporation, a decision that contributed to its demise.

Governments have important roles to perform – in particular to ensure the provision of public goods and a social safety net – but they do not include risking taxpayers’ money in businesses. The argument that the stronger incentives for good performance in the private sector favour private ownership is not academic or ideological – it is pragmatic. A recent survey found that two out of three NSW residents don’t care whether the state government or business runs the electricity industry.

The political aversion to privatisation is costing New Zealand potential gains in living standards. A Business Roundtable study (www.nzbr.org.nz) estimated that New Zealand could gain around 1% of GDP a year by privatising SOEs (leaving aside local government-owned businesses).

Unless wages and other incomes in New Zealand are to drift further behind those of Australia and other countries, this is an economic reform that will have to come back on the political agenda sooner or later.