Twice a year the Reserve Bank publishes a Financial Stability Report to assess the soundness of New Zealand’s financial sector. A key concern in the Bank’s May report is the impact on the economy of falling dairy prices: “Approximately 25 percent of farmers are estimated to have negative cash flow. Farmers experiencing negative cash flow are likely to cut back on farm development and reduce drawings. With current milk prices near five-year lows, and a weak outlook, it is likely that dairy farmers will face difficult conditions for two consecutive seasons.” 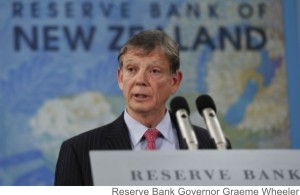 The pressure on the dairy sector is one of the main reasons the government is unlikely to announce a surplus in Thursday’s budget. The impact on regional and provincial New Zealand will be significant. But with only $1 billion of funding set aside for new spending, the money available for regional initiatives will be limited.

In the face of this setback, it is important to consider ways to boost the regions – and the wider economy.

This week’s NZCPR Guest Commentator, the Mayor of the Hurunui District Council, Winton Dalley, has provided a lead in a recent speech he gave to The Future of the Heartland Forum:

“My brief is to talk from the District Council perspective about the issues facing our district and particularly our export producers as we contemplate Hurunui’s contribution toward the Government’s goal of doubling export earnings by 2025.”

The Mayor explained that while the region is a key producer of top quality agricultural exports – meat and wool, dairy and wine – it is constrained by a lack of irrigation: “We have high river flows identified as available water to be stored, and we have a number of suitable sites for major water storage, and with approximately 110,000 hectares of land suitable for irrigation, and only approximately 1/3 of that currently irrigated, we have some grossly under utilized assets.”

In spite of a promise by the Mayors of Canterbury to drought proof the region 15 years ago, no real progress has been made.

In 2011, the government established the Environmental Protection Agency to address the problem of major infrastructure projects of a national significance being held up unduly by the Resource Management Act. In 2013, they created Special Housing Accords in partnership with the Auckland Council to streamline the consenting process for the building of affordable housing. Now a similar mechanism is needed for major infrastructure projects at a regional level. And with around 95 percent of New Zealand’s rain water flowing out to sea, this should clearly apply to irrigation.

The Mayor outlined the benefits of such a scheme: “The Nation would not be missing out on approximately $1/2billion from this district, at the farm gate per annum, plus the multiplier throughout the national economy and the multiplier of added value for export, if we were able to irrigate the remaining irrigitable area.”

When it comes to government policies that prevent growth, the Mayor noted that: “the RMA process in its current form can frustrate our endeavours.”

Reform of the Resource Management Act is crucial for New Zealand’s future progress. But until the government is able to pass their changes through Parliament, councils should take a lead by allocating a dedicated staff member to guide and assist applicants through the RMA consenting process. The reality is that if a Council’s consent process is too onerous, expensive, and time wasting, it will drive away people with good ideas. But councils should be making every effort to enable good ideas to be turned into wealth creating projects in their regions.

In his speech, Mayor Dalley was critical of the government’s environmental policy: “The regulatory protection of native biodiversity, outstanding landscapes, and coastal environments has long been and still is a contentious issue in Hurunui. It is unequivocal that the current regulatory rules based approach is counter productive. It is clear that areas protected with the goodwill and pride of landowners ensures more sustainable and higher quality protection. To demand, by punitive regulation, that landowners should bear the cost of protection, the loss of use and production, thereby turning these areas into a liability for them rather than an asset, is short sighted.”

If the government imposes environmental goals onto the country through national policy statements, every effort must be taken to ensure they are sensible, affordable, and unable to be captured by local council activists. That means setting definitions and standards, as well as standardising criteria, so that ‘significant’ landscapes, for example, are on a ‘national’, not ‘local’ scale. Furthermore, it means ensuring the goals have been subjected to a rigorous cost benefit analysis to ensure they are ‘reasonable’ before being passed on to councils.

In his speech, Mayor Dalley explained that Hurunui has a small rating base but huge infrastructure costs – especially roading: “The majority of our roads fall into the lowest classification and will ultimately attract lower levels of Government funding, leading to correspondingly low levels of maintenance and reliability”.

* The government should pay rates on conservation land

With the Department of Conservation (DOC) controlling almost a third of New Zealand’s land area, many regions such as Hurunui have significant conservation reserves. The problem is that while visitors to DOC reserves may be high users of roading and other local infrastructure, DOC does not pay rates and therefore does not contribute to their upkeep.

A recent discussion paper by Local Government New Zealand estimated that the cost to the government of paying rates on conservation land was in the region of $40 million. Allocating this to cash-strapped councils would assist them in providing infrastructure and services to the conservation estate.

In his speech, Mayor Dalley touched on employment: “This district has a high reliance on an immigrant workforce, and close to zero local unemployment. Any increased demand for labour would require either better mobilisation of the New Zealand workforce or more convenient policies for recruiting and retaining quality overseas staff.”

Motivating the unemployed to move to areas where there are jobs is a key responsibility of government welfare services. Clearly, more clearly needs to be done to ensure that where possible, available jobs go to New Zealanders rather than immigrants.

Councils can also play a crucial role in reducing unemployment. Dale Williams, the former Mayor of Otorahanga, found that many businesses in his district were thinking about relocating because of the difficulty of finding workers. It turned out that the shortage was due to young people leaving the district, as soon as they left school, and not returning. So a trade training centre was set up offering courses designed by local employers. A youth transition programme liased with school leavers fortnightly to support them until they were in training, further education, or employment. By putting the needs of their employers first, youth unemployment in the district dropped to zero – and stayed that way.

Local councils can also take a leadership role in working with central government to bring prosperity back to the provinces.

Councils in depressed areas should liaise with central government to declare their district an Enterprise Zone. They could offer rates deferment to businesses relocating from elsewhere in the country – or for existing businesses undertaking major expansion – in the same way that most councils will offer rates postponement for some residential ratepayers.

Back in 1980, Richard Izard took advantage of an ‘enterprise’ scheme to set up a specialist saw bade manufacturing business in Wellsford. At its peak, it was the largest producer in the world, employing over 500 people and pumping tens of millions of dollars a year into the local economy.

But while there is much that councils can do to help boost their regions, sometimes it is leadership from central government that is needed. The government’s response to climate change is a case in point. At the present time it is a drain on the whole economy, including the regions, but it has the potential to be turned around.

*Turning climate change from a liability into an asset

The government is presently consulting on New Zealand’s target for reducing greenhouse gas emissions by 2030. The existing target is to reduce emissions to 5 per cent below 1990 levels by 2020. Given that New Zealand’s population was 3.3 million in 1990, is 4.6 million now, and will be well over 5 million by 2030, this sort of emissions reduction target does not make sense – especially when New Zealand already has one of the highest rates of renewable electricity generation in the world, and when almost half of our emissions come from cattle and sheep!

Putting aside the issue of whether there should be a target at all, it is clear that a different approach is needed in the national interest.

Firstly, it is time to demand that the 50 percent of New Zealand’s land area that is in pasture, is treated as a carbon sink that captures and stores atmospheric carbon. Other countries are now doing this and their research shows that grassland farming is a net absorber of greenhouse gases, not a net emitter. This would go some way to establishing a realistic 2030 target.

But secondly, why not develop a national goal of planting 1 million Kauri trees on Department of Conservation land. These native forests would not only reduce greenhouse gases to help meet our target, but some trees could be earmarked for selective logging to provide on-going supplies of quality timber for local artisan businesses. Other native hardwood species could be planted too.

Appropriate tracts of conservation land throughout the country could be earmarked for the Kauri Forest National Project, to provide a focus for communities from one end of New Zealand to the other. Volunteers could help with raising seedlings. Others could help with planting the trees.

Together, grassland farming and the Kauri Forest National Project would create a worthwhile national climate change goal for 2030.

Just as Sam Johnson encouraged volunteers to form a Student Army in Christchurch to help with the earthquake clean up, why not form a Civilian Army of volunteers in communities throughout the country to help with the Kauri Forest National Project – and other activities to improve and strengthen local neighbourhoods.

In the same way that the Student Army operates in partnership with local councils and Civil Defence, so too could the Civilian Army. In addition the Army Reserves may be in a position to help. If the unemployed were encouraged to contribute as well, their engagement with the community would undoubtedly assist them in finding employment.

To prosper, regions need industries. On the back of the petroleum industry, Taranaki has the highest paid workforce in the country, and with dairying and tourism thriving as well, the myth that extraction industries are incompatible with other businesses, is dispelled.

Central government believes that the resource sector has the potential to significantly improve regional economies. Local government should demonstrate their support as well.

Australia has identified small business expansion as the key to boosting economic growth. To succeed small business needs better cash flow and better tools for innovation, so in the Budget the Treasurer announced an immediate tax deduction for individual items up to $20,000 – available for the next two years: “If you run a cafe it might be new kitchen equipment, or new tables and chairs. If you’re a tradie, it might be new tools or a computer … cars and vans, kitchens or machinery … anything under $20,000 is immediately 100% tax deductible from tonight”.

Is this the sort of government initiative that could give our regions – and our country – a real boost?

Should central government be doing more to promote regional growth?