After the French Elections, Is Populism in Europe Dead?

The spectre of an anti-European Union, anti-immigrant brand of populism that has threatened to haunt Western Europe seems to have been resoundingly dispatched in the French presidential elections, following pro-EU electoral victories in the Netherlands and Austria. Mainstream political parties in the U.K. and Germany are favored to win in their upcoming elections as well.

But it is too soon to celebrate the end of this brand of populism, writes Geoffrey Garrett, dean of the Wharton School, in this opinion piece. He urges the EU’s mainstream political leaders to take this populism very seriously and adopt measures to “right the ship” back to its liberal, global and more tolerant trajectory (This article originally appeared on LinkedIn). 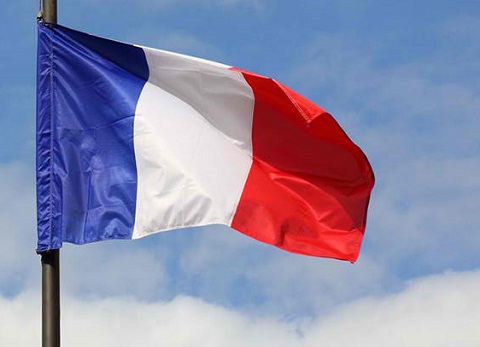 A scary graph has been doing the rounds on the internet over the past couple of months. It comes from Ray Dalio’s Bridgewater Associates, a big player in trading macro/geopolitical risk. Bottom line: In terms of the surging vote for populist parties in the Western world, the last five years look a lot like the 1930s.

I don’t believe many people are seriously worried that we are on the verge of World War III. Accidental conflict, say triggered by North Korea’s man-child leader, Kim Jong-Un, is more plausible — and even that seems very unlikely.

But even if it doesn’t result in war, the rise of populism is a really big deal because it portends a radical break with the trajectory of the western world since the end of World War II — more authoritarianism and less liberalism, more nationalism and less cosmopolitanism, more protectionism and less globalism, more closed border and less immigration. We are looking at potentially the biggest change in the West since the 1930s even if there is no war. 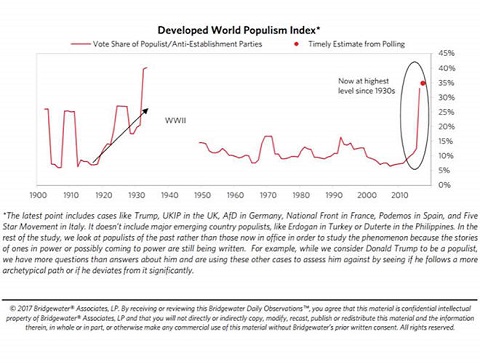 That’s why this past weekend’s French presidential election was so important. Nothing represented a clearer choice between surging populism (Marine Le Pen) and robust defense of internationalism (Emmanuel Macron).

Macron’s emphatic victory puts an exclamation mark on a micro-trend that has probably not received the attention it deserves. Following a victory for the liberal status quo in the Netherlands and the 100-day assessment of Trumpism that its bark is worse than its bite, the fever of populism may be breaking.

Next month, the Conservatives will likely be re-elected in a landslide in Britain, with the insurgent populism of UK Independence Party very much an afterthought. And this autumn’s German election is looking like a conventional battle between the center-right and the center-left.

But even if all this happens, it will be far too soon to celebrate the defeat of populism. Instead, the most we can hope for is the combination of wakeup call and breathing room that leaders from the mainstream need to right the ship. The challenge looks daunting.

For today, let’s just focus on Europe’s three big countries, and the domestic and regional challenges facing the new governments, in the order of their elections this year: France, the U.K. and finally Germany.

In France, Macron must take on a bunch of long-overdue reforms needed to make the French economy more competitive — reforms that will no doubt fan the flames of populism in what remains a very divided country. And if the European Union is to rebound from its several body blows this decade, that will require French support not only for the euro, but also for the real political and real fiscal union needed to complement the single market/euro. All this on the shoulders of a 39-year-old just elected to his first office, with a year-old party that doesn’t yet have any representatives in the French parliament.

“The rise of populism is a really big deal because it portends a radical break with the trajectory of the western world since the end of World War II.”

In the U.K., Theresa May’s Conservatives are in a much stronger position politically — mostly because in Britain’s winner-take-all political system, the only alternative government, the Labour Party, is in worse disarray than when Margaret Thatcher came to power almost 40 years ago. But like the majority of her party, May was in the “remain” camp on Brexit. She now must negotiate an exit that works well for Britain that the rest of the EU will accept. Right now, that looks like an empty set to me, which is why I think the uncertainty overhang from Brexit will last into the indefinite future.

In Germany, the most likely election outcome is a continuation of the “grand coalition” between the mainstream left and right parties, which neither side wants but that allows Germany to avoid having either the far left or far right in the governing coalition. But the center has to take seriously Germany’s anti-immigrant and anti-EU sentiment, at the very time when Germany needs to commit (much) more money to support the weaker members of the Eurozone and to defend the EU’s open borders policies that are under such attack.

No surprise the news media have been playing up Macron’s victory as a giant win over populism. But ‘victory’ is too strong a word. This year may prove to be the year when the tide was stemmed. But the British, French and German elections — not to mention the Dutch before them — are only fingers in the dyke. The whole EU needs radical surgery. At least we may soon have leaders with the political clout to take it on. Let’s hope they have the political will.