How to wake up without an alarm clock

Mark Sisson is the author of Mark's Daily Apple; a health and fitness blog with an emphasis on food and nutrition. If you’re interested in learning why eating, sleeping, and playing like our ancestors is the key to health and longevity, check it out.

It goes without saying that Grok never had to resort to a shrieking alarm clock to get him up in time for the day’s activities. But he also never had to worry about beating rush hour, or getting his little Groklings to school. Even if we subscribe to all the other behaviors of our ancestors – diet, fitness, rest, relaxation, play – it is our reliance on external, artificial rousing mechanisms that’s the hardest vice to shake. One could even argue that modern (corporate) culture requires the use of an alarm clock. How else are we to manage our most precious commodity of all, time? 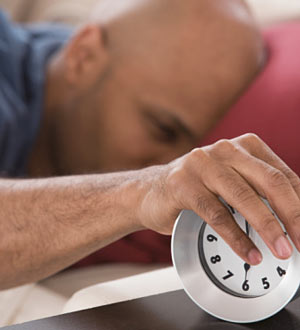 I think an argument could be made for the value of quality of sleep, rather than quantity. See, when we wake up naturally, without the use of external alarms (either intentional or random noises), we tend to feel at peace. Our bodies are waking up of their own accord, usually at the end of a light sleep cycle. Given free reign, the human body will usually act in its own self interest. It’s only when we disrupt that balance, either by stuffing it with improper foods or subjecting it to shrill alarm clocks that stress begins to impact us negatively. An alarm clock blaring in your ear just as your dream’s about to get good (you’ve almost achieved flight!) is jarring; it wakes you up prematurely and in a sour mood. That’s physical stress. You’re confused and liable to hit the snooze button, but you’re only prolonging the inevitable. You will have to get up and get dressed, trundle out to the car and chug espresso just to stay awake. That’s mental stress.

Wouldn’t it be nice to forgo all that stress and train yourself to wake up when you want, how you want, using only natural means? Your mornings will no longer consist of futile battles and, though you’ll still have to show up to work everyday, it may not be something you dread anymore. Rather than seek out the most annoying, ear-splitting alarm clock on the market (how ridiculous and counter-intuitive does that sound?), you can actually train yourself to wake up using your own internal rhythms.

The most important step on the path to freeing yourself from alarm clocks is establishing a consistent wake up time. That’s pretty easy, because most of us have a set time at which we’re “supposed” to wake up – we just tend to ignore it. Don’t throw out your clock just yet. You’re going to need it for this.

1. Pick your ideal wake up time, and set your alarm for the same time every day. When the alarm goes off, get up! Don’t languish in bed. You’re trying to set your circadian rhythm, the internal clock that governs your physiological processes. Luckily, our concept of the 24-hour day is pretty similar to our natural cycle, so the two will mesh well once they’re consistent.
2. Allow yourself enough time to get a good night’s rest. Give or take an hour or two, you’ll want about eight hours of good sleep per night. Most people function best on that amount, and good sleep is crucial if you plan on producing growth hormone and recovering from a day of exercise, stress, and activity.
3. Pick a bedtime that will give you the hours of sleep you need. Go to bed at the same time every night. This, along with a set wake up time, will help you establish a consistent rhythm.
4. Gradually wean yourself off the alarm. If you’ve been following your sleep schedule closely for a week, you should be acclimated enough to test yourself. Try setting the alarm for 15 minutes later than usual – not so far off that you’ll ruin your day if you sleep in, but enough that you’ll find out if you can wake up at the same time without the alarm. Continue this until you’re waking up consistently at the desired time, sans alarm. Eventually, you’ll be able to go to bed at different times (not too late or too early) and still wake up on time.

Another, slightly more advanced (but also more desirable) avenue to pursue is waking up without an alarm entirely, at the time of your choosing. I find I’m actually able to “choose” a wakeup time at will and, more likely than not, I will wake up around that time. For me, I sort of just developed this ability on my own. I suspect that it lies within all of us, but most people suppress it by eating the wrong foods, living stressful, sedentary lives, or getting hung up on artificial problems. In fact, once I got rid of all the excess grains and sugar that defined my life as a marathoner and triathlete, I noticed my internal sleep rhythms becoming more and more reliable.

The key to all this may lie in a little hormone known as adrenocorticotropin. In a study some years back, researchers observed that patients who were instructed to wake up at a certain time had elevated levels of the hormone about an hour before awakening. When they expected to sleep until 9 AM, but were woken up at 6 AM, there was little adrenocorticotropin produced. Instead, they had elevated levels of cortisol, the body’s usual stress-response hormone. But when they were warned they would be getting up early, their bodies released adrenocorticotropin an hour prior to waking. This suggests that the hormone is a subconscious reaction to a conscious decision. We may not consciously secrete adrenocorticotropin, but we can consciously decide to wake up at a certain time and, if in good condition, our bodies will respond by releasing the hormone responsible for preparing us for awakening.

In order to maximize your ability to secrete the hormone and get up when you want, try this:
1. Again, decide when you want to wake up. Pick a time, any time.
2. Trying to keep your sleep time adhere to 90-minute intervals, pick a time to go to sleep. Most people operate on a 90-minute sleep cycle, and it’s generally easier to wake up from either the first 30 minutes (as in a nap) or the last section, which tends to be lighter sleep.
3. Before you sleep, actively visualize the time of awakening. Think about when you want to wake up, and how. Get creative. Imagine yourself waking up and looking at the clock, which – in your imagination – will be set to the correct time. It’s all about implanting that time in your mind. Remember, our internal clocks have adapted to the 24-hour time cycle, so thinking of your wake up time in terms of physical, man made clocks will be helpful. Your conscious anticipation will be guiding your subconscious. We’re not sure how the brain monitors the passage of time, but it does.
4. You can even use your alarm as motivation. Set your alarm for the time at which you absolutely must awaken; if everything goes according to plan, you won’t need it, but the knowledge that it’s there ready to go off could prompt the release of adrenocorticotropinm and get you up and alert. So, in a sense, you’re still using the alarm clock, but you’re not subjecting yourself to the horrible, intrusive noise.

I don’t even own an alarm clock anymore. I don’t really need one. With pretty consistent accuracy, I can wake myself up on command.

Other random tips:
* Use natural light to your advantage. Grok woke up with the rising sun, and you can too. Leave your blinds open so that the morning light wakes you up. Nothing like some nice, warm Vitamin D washing over you in the morning.
* Avoid too much coffee, especially late in the day. I drink coffee myself, but I don’t use it as a crutch. If you find yourself needing it to stay up late to work on a project, or just to get moving in the morning, perhaps you need to reevaluate the way you’re living. Even the best beans are no match for a night of uninterrupted (by alarm or by caffeine still coursing through your body) slumber.
* Drink a tall glass of water before bed, but not too much – you don’t want to need plastic sheets.
* Get plenty of exercise, minimize stress, and enjoy life. This should go without saying, but having a healthy, strong body and a clear mind will make for the best sleep. If you’re worried about something at work or feeling crappy because you missed a week of working out, it’s easy to dwell on it. Your sleep will suffer and, once you do get to sleep, waking up will be harder than ever. Do the right thing, follow the PB, and get plenty of exercise and relaxation.