The NZ International Comedy Festival, which starts on April 18th, will feature a huge range of comedians; both known and unknown, international and local. Two who may fit into both of those second categories are Ed Caruthers and Graeme Rowe, who will be sharing the stage for the first time in As Many Jokes As We Can Get Away With.

GRAEME: Takin it to the limit

ED:  Me and Graeme Rowe want to set a record for most ball-bouncingly funny gags in a festival show.

GRAEME:  Because I was asked

ED: Mitch Hedberg and Richard Pryor are resurrected, Bill Cosby's senility is restored, and Eddie Murphy learns how to be funny again.

ED: One-liner dudes like me, the more gags the better

GRAEME: The Office (UK), Flight of Conchords, Stand Up 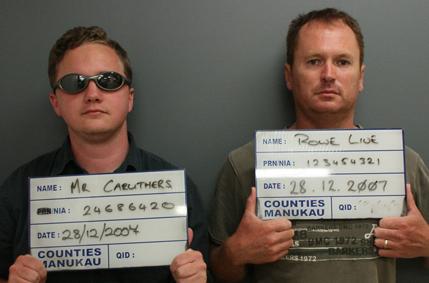 GRAEME: The constant ability of TVNZ news to make news headlines, when there simply is no news, followed closely by someone in NZ cricket saying that the NZ cricket team had found some form.

ED: I did a gig in Palmerston North and they laughed a solid 30 seconds at each joke. I got through a third of the material I thought would be enough. Bless those inbred hicks!

GRAEME: Being asked to perform and getting paid for it

ED: None really, its been pretty flawless

GRAEME: One friday night Late show at the classic, when some female audience member just kept saying 'get off, get off , get off......" over and over, while another guy said "are you gay? are you gay? are you gay? are you gay?..........over and over. I didn't get off, and no I am not gay, but I wouldn't mind it sometimes, you know, just to get all those cool clothes and stuff and be able to drive around in a Honda CRV and decorate my house, and sometimes guys really have no idea about shoes, what are they thinking?  But ultimately the whole bum sex thing would put me off.

GRAEME: “Be the best that you can be NOW, not later.” - Michele A'Court

ED: Don't try a rape joke unless its extremely funny.

ED: The Cook Bar in Hamilton

GRAEME: The Classic, in Auckland.

ED: Give me three minutes to let me change your mind. Or to impregnate you, whichever works best for you.

GRAEME: Then you haven't seen a good one, you ignorant, obnoxious, self absorbed twit.

ED: 'Lotion' by the Greenskeepers. It’s about serial killing, always a warm cheery topic to start with.

GRAEME: None but one day it will happen, oh yes one day it will be..........my sons think it should be either something from The Wiggles or AC/DC, so haven't yet decided.

GRAEME: An acceptance from the NZ public that we do in fact have some very funny NZ comics and to get out there and see them instead of sitting at home judging it from decades ago, and waiting for the next Billy Connelly tour. Can't all be Billy T James bro.

ED: 'Want me to give you ten million dollars and free hookers for life?' 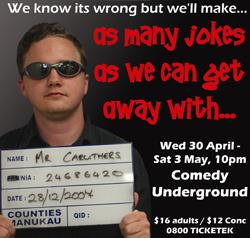 As Many Jokes As We Can Get Away With runs from Wednesday 30 April to Saturday 3 May at Comedy Underground, 305 Queen St. Tickets from Ticketek (Adults $16, Students $12).