For a town that sports only one weekly gig, and a revolving handful of suburban shows, Wellington has long been punching well above its weight on the local comedy scene. Even ignoring one particular , somewhat famous, musical duo, the capital has produced five of the last seven Billy T Award winners, and is the hometown of three of this year’s nominees. One of them, Steve Wrigley, is a regular on the national scene, whilst previous winner Ben Hurley has spent the last three years plying his trade on the London circuit, headlining innumerable clubs. This year, they play similar rooms and times, and take a minute or two each to answer our Questionnaire:

Steve Wrigley : The Get Frank Questionnaire 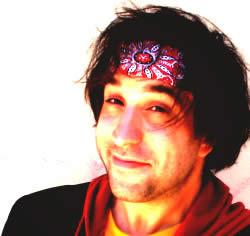 The festival is just amazing, a three week party, and I love performing. Its about the people and such.

Awkward stuff, like the Office (The UK AND the US version!)

I'm not sure what but I bet it involved Mark Ellis and or Matthew Ridge???

Being nominated for the 2008 Billy T Award.

Doing a terrible gig at Shadows bar at Auckland Uni.

Love them and they will love you!

Well at the moment it's Cori Gonzales Macuer, Mrs Peacock and Jeremy Elwood. I just went on tour with those guys. They are awesome.

A toilet. It was a strange gig. Don't ask. I was dressed as a janitor.

Nothing. They are beyond saving and that point.

For a while I was really into coming on stage to enter sandman by metallica. Then I realised that that sort of suggests that I'll put the audience to sleep, so now it's Wake up Little Suzy by Buddy Holly.

A full time comedy club in Wellington and Christchurch.

Don't you feel awesome wearing bandanas? I'm sure people make fun of you all the time for wearing a bandana but it looks good I think. (Ok that's not really a question but I can dream)

Ben Hurley: The Get Frank Questionnaire·         Describe your festival show in 6 words.

New explosive comedy from me, Ben. 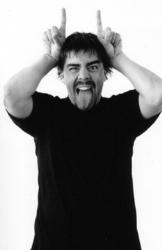 I always do one, this is my 7th year in a row. Even when I was living in the UK I came back every year to do the festival. It's our time of the year to shine and you can't call yourself a comedian unless you're involved somehow.

Andy Parsons and Stewart Lee from the UK, Chris Rock and Norm McDonald From America, Greg Fleet from Australia and Me as the host because it's my dream and I want to be in it!

I'm a bit of a Stand up purist, I like Stand up without any gimics or props. Just a man or woman with their jokes, wits and stories to entertain a crowd...and a Donkey, everyone loves a Donkey. Is it too late to put a Donkey in my dream comedy lineup?

Hateful comedy. Where comics play on peoples predudices and fear to get laughs. The old school comics that did racist and homophobic material. We've all moved on from that hopefully.

Ive only been back in the country 3 days so probably when I was flying back to Auckland from Rock2Wellington on Easter Monday. The plane was full of bogans. At one point we hit a turbulence bump and one of the more vocal bogan bretheren suggested "I think we just hit Jesus on his way back up!"

Probably doing the big Rock Festivals in the UK. Reading and Leeds festival gets 2-3000 people in the comedy tent and if you get it right its like nothing else.

Getting it wrong at Leeds festival one year.

If they don't get it, that's their fault.

Don't ask the audience if you're funny, tell them you're funny. If all else fails get your cock out or, if you're a woman, get someones elses out.

In New Zealand it's The San Francisco Bath House in Wellington but my favourite club in the world is called "The Stand" and is in Glasgow.

At the Wainuiomata League Club. They were playing that strange Aussie Film "Bad Boy Bubby" on the big screen and wouldn't turn it off when I came to do my set. Therefore, I performed in front of a giant retarded man wrapping a cat in Glad Wrap.

That's like saying they don't like music. There's so many styles and genres of Stand up that there's bound to be something they like. However, if that's not the case I probably wouldn't say much, I try not to associate with humourless dicks.

Its changed over the years, at one stage it was always "Generator" by the Foo Fighters, then, for a while, it was "She Sells Sanctuary" by The Cult. More recently I like "You Again" by Shihad or "Crazy Train" by Ozzy Osbourne. Maybe for this years festival show I'll walk on to a bit of Hayley Westenra or Ben Lumis.

The backing of the media. Let's stop printing articles with the theme "why isn't NZ comedy funny?". Our comedians do well overseas and our comedy Festival gets bigger every year with local acts selling more and more tickets. Clearly we are funny.

How do you get such an adoring female fanbase? Unfortunately, that question wouldn't be quite relevant...yet.