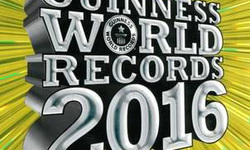 The world's biggest-selling annual is back and bursting with thousands of amazing new records! Last year, our diamond anniversary edition was the Christmas #1. This year, we're building on this success to bring you an all-new design, thousands of exciting new and fully updated records, and exciting new photography from around the world. The 2016 edition is our most ambitious yet! AUTHOR INFORMATION In 1951, Sir Hugh Beaver, the then managing director of the Guinness Brewery, went on a shooting party and became involved in an argument. Which was the fastest game bird in Europe - the golden plover or the grouse? He realized then that a book... read full article