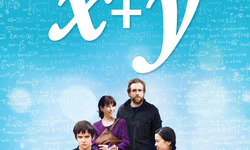 Written by James Graham and directed by BAFTA Award winner Morgan Matthews. Starring Sally Hawkins (Blue Jasmine, An Education), Asa Butterfield (The Boy in the Striped Pyjamas, Hugo), Rafe Spall (Life of Pi, Prometheus), Jo Yang and Eddie Marsan (War Horse, Sherlock Holmes), X+Y follows Nathan, an awkward, idiosyncratic teenager, grappling with the sudden death of the one person who understood him; his father. As he struggles to connect with those around him, he is introduced to an anarchic and unconventional maths teacher who takes Nathan under his wing.  Soon Nathan finds himself selected for the UK Mathematics Squad and, against the odds, representing... read full article