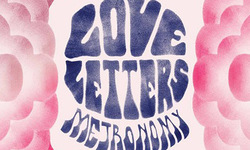 Britain’s much loved, quintessentially English, modern pop act Metronomy have returned with a new album, LOVE LETTERS. www.warnermusic.co.nz Two years have passed since the public heard any new music, and now Joseph Mount is back.  His 2011 album THE ENGLISH RIVIERA (a love note to England’s south coast where Joe grew up) was lauded by the critics, evolving into a sleeper hit that elevated Metronomy to the upper echelons of the UK's musical elite.  Joe Mount quietly became a creative force to be reckoned with around the world and one of the must-see live acts with a legion of devoted fans.  Subsequently, THE ENGLISH RIVIERA... read full article