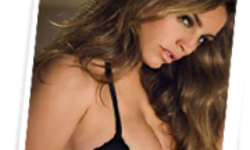 Kelly Brook (born Kelly Ann Parsons;(born on November 23, 1979) is a British model, actress, occasional swimwear designer, television presenter and Playboy Girl. Brook's modelling career began at 16 after winning a beauty competition, in which she was entered by her mother. She later worked on a range of advertising campaigns, including for Foster's Lager, Renault Megane, Walkers crisps, Piz Buin and Bravissimo, a company that specialises in bras and lingerie for large-breasted women. Her figure eventually caught the eye of the editorial team of the Daily Star tabloid, which began featuring her as a Page Three girl. In October 2010, Kelly Brook... read full article