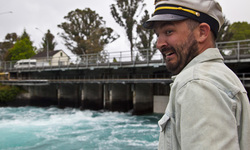 On January 21st, Auckland entrepreneur Jimi Hunt is taking his pink, inflatable pool float and is going to "Lilo The Waikato". The 425km journey from Taupo to Port Waikato is a bid to raise awareness for depression in NZ. Something tells me that this will be an interesting adventure… So you've got to admit lilo-ing the longest river in NZ must be something of a conversation starter. What are most people's reactions when they find out about what it is your doing? Madness. Greg Boyed, the Close Up presenter said it best; "he’s doing it not because he's mentally ill, quite the opposite, he's doing it because he's no... read full article