The World’s Biggest Waterslide will be back in West Auckland from 12-14 February 2016, raising money and awareness for mental health with charity Live More Awesome - and this time it is official.

New Zealanders got the chance to try out the first version of World’s Biggest Waterslide in 2013 in Waimauku. A purpose built 600m inflatable slide was created for the 2015 edition, held at Jonkers Farm at Bethells Beach, before the slide was moved to Action Park in New Jersey and officially certified The World’s Longest Waterslide by Guinness World Records in July this year.

The slide will be back at Jonkers Farm in February, with 950 tickets for sale for the three-day event, ensuring that the people that do get to come have a full day of unadulterated sliding fun. Those who miss out on a ticket can work towards one of 200 golden tickets available for the top 200 fundraisers.

New Zealanders are known for their competitive spirit, and Jimi Hunt and Dan Drupsteen want Kiwis to be known for healthy dialogue about mental health, as well as being the country that owns and enjoys the World’s Biggest Waterslide.

The duo are the brains behind registered New Zealand charity Live More Awesome and they have created the waterslide as just one of the many events they do to “live more awesome” and raise money for mental health awareness initiatives. 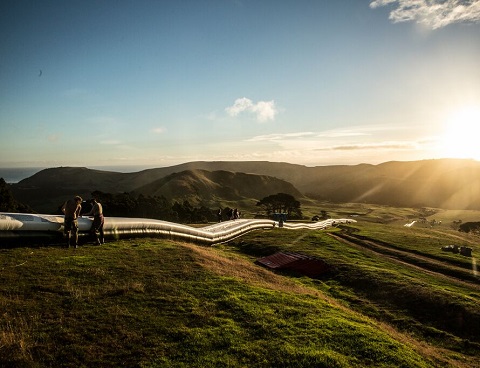 The pair have received international media attention following their appearance on the Today Show at the time of the World’s Longest Waterslide official presentation by Guinness World Records. They are determined to use the money raised by the fundraiser and the increased profile to make a difference to the way New Zealanders perceive mental health.

“Both of us have suffered at the hands of depression,” explains Jimi. “It was only after we both dropped our egos and asked for help that we found hope and support. We need to have as many conversations about mental health as possible to let people know that they’re not alone and they too can ask for help.”

The festival is being held at Jonkers Farm, an iconically beautiful property overlooking Auckland’s west coast. As well as the big slide there will be performances from a yet-to-be-announced line-up of NZ’s top music producers, DJs and performers, all of whom have gifted their time to support this awesome local initiative. Wellness workshops will also take place throughout the day.

“This is a really important moment in time to talk about it and get these issues out in the open,” says Dan.

“One in four Kiwis suffer from depression and as well as encouraging everyone to find joy in living more awesome, we also want to get a dialogue going that helps to foster optimal mental wellness and reduce the stigma associated with depression and mental illness.

Tickets on sale @ www.worldsbiggestwaterslide.com. This is an R16 event.