Before it even opened its doors, Vanguard Military School has been strongly criticised by political parties, teacher unions and lobby groups. Getfrank's contributing editor Stuart Macadam believes the hostility is based on conventional wisdom, alternative facts and ideology.

Do you believe in a society which develops schools which are specifically tailored to meet the needs of wayward youth? Do you think public schools are capable of accomodating for all students? Should parents be forced to keep their kids in a schooling system where they continue to fail?

If you answered yes to the first question and no to the second two, there should be no reason why you shouldn't get behind charter schools like Vanguard Military School.

Vanguard opened its doors in 2014 and has consistently turned problematic students into law abiding, productive members of society. Stuff.co.nz revealed their pass rate to be above 90% for NCEA Level 1, 2 & 3. Physical education, maths and english are compulsory. Uniforms, breakfast and transportation costs are covered for all students. There is no time for nonsense. If you step out of line, you're going to know about it.

If New Zealand was a nation that encouraged and rewarded success, there would have been three or four Vanguard Military Schools by now.

But we aren't, and the very existense of all charter schools is under threat. The Post Primary Teachers Association, numerous political parties and large chunks of the media are desperate to get rid of them.

Here are the common objections

1.They don't have to employ qualified teachers
2. They don't have the same accountability
3. There is no evidence charter school are delivering for vulnerable kids
4. Public schools miss out on valuable funding
5. Big corporations can come in and profit from them
6. Charter schools don't work overseas

All the core subjects are taught by qualified teachers and the results (see above) speak for themselves. It's difficult to understand why specialist subjects like engineering and defence force studies would be better taught by an academic rather than someone who has real world experience in those industries. This is a common objection, so let's throw the ball back. Where's the evidence the qualified teachers deliver better results in state schools? How do we know more teacher qualifications produces better teachers in specialist subjects? There are very few schools who have a pass rate as high as Vanguard, even though they're loaded with qualified teachers.

There is plenty of accountability, not only to the parents, but also the government, the whanau groups and any financial sponsors. Vanguard CEO Nick Hyde says "we are given ERO reports like all other schools and have our work moderated by NZQA.  We also do quarterly reports for the Ministry so very hard to see a lack of accountability."

They are delivering well beyond expectations. You can see how far four of their students have come in this video here. Many other students have gone into the defence forces or pursued a trade or tertiary study. 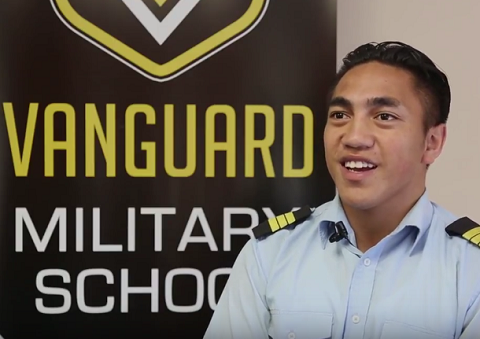 Funding has never been taken away from public schools.  A new fund was created for charter schools. It's also worth noting that public schools receive substantial amounts of funding already. Even if additional funding were to come in, the current approach to educating troubled youth in state schools isn't working and no amount of money would fix that.

Have all the opponents of Vanguard got copies of their financial statements? If so, let's hear all about who's profiting from the school.

So what if they don't work overseas? There are many things from overseas which work well but would fall over if it came to New Zealand and vice versa. We have seen this with Walmart's venture into Germany and the repeated attemps to increase the popularity of rugby in the United States.

The real reason why all these groups don't like Vanguard is because the school completely explodes every failed idea that they stubbornly cling onto.

What are these failed ideas? That discipline is bad. That you should be given as many opportunities as ppossible to pass rather than being failed. Or, perhaps the most revolting idea of all... teachers should just accept bad behavious as part and parcel of their job.

Vanguard has an excellent success rate because it goes against conventional wisdom. These results are achieved with students who have fallen through the cracks at public schools. Teaching methods are simple but effective.

More than anything else, the opposition don't like being embarrased. Vanguard have proven that a school system outside of the PPTA chokehold is more than capable of producing results.

Putting charter schools under the state system would undo all the good work which has been achieved so far and turn them into a baureaucratic mess.

Defending Vanguard Military School doesn't benefit me personally. It does however benefit troubled students who are desperately looking for a chance to turn their lives around.

I can only hope the next government will see the value in its continued existence.