In this politically correct world, our right to free speech is increasingly being eroded by the apparent rights of others who disagree with our views. 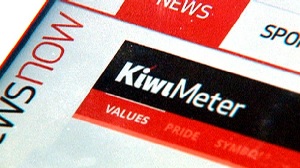 State broadcaster Television New Zealand came under attack last month, when they were accused of including
a ‘racist’ question in their new KiwiMeter survey.

KiwiMeter, a 10-minute on-line questionnaire, which examines what being a New Zealander means to different people, places participants in one of six groups according to their views – patriot, globalist, egalitarian, loyalist, traditionalist, or sceptic.

TVNZ’s Head of News and Current Affairs, John Gillespie, explained that KiwiMeter is a scientific study designed to provide a data-driven picture of New Zealand’s national identity in order to help the broadcaster ‘stay connected’ to the issues their audience most cares about. It was put together by the same team that developed their Vote Compass election survey, and was preceded by a local pilot study of 11,000 of those 300,000 participants.

Over 220,000 New Zealanders have completed KiwiMeter, and with the flag question accurately predicting the results of the final referendum, the data will indeed give TVNZ a real understanding of the views of our population.

But it didn’t take long for the critics to emerge. Within days of the survey being launched, the Labour Party’s MP for Te Tai Tokerau, Kelvin Davis, claimed that KiwiMeter was inciting “racial intolerance”.

There are three questions that touch on Maori culture, where respondents are asked to agree or disagree with a statement:

Mr Davis claimed the question that included the statement, “Maori should not receive any special treatment”, was “out and out racism”. He demanded it be removed from the survey, stating, “It just evokes images of Don Brash 2004: implying that Maori have special treatment, I’d like to know what special treatment they’re talking about.”

Well, let’s try to answer that question for Mr Davis – and let’s begin with his Te Tai Tokerau electorate seat.

The Maori seats were created as a temporary measure in 1867 when gender, age, and private land title were the criteria used to determine voting eligibility. Since much of the land held by Maori was in common ownership, rather than private title, the Maori seats were introduced to ensure all Maori men had the right to vote – a privilege not enjoyed by those non-Maori men, who held land jointly or not at all.

In 1879, when all men gained the vote, the Maori seats should have been abolished, but as a result of strong advocacy – and weak politicians – they were retained.

It was the same in 1996, when MMP was introduced. The Royal Commission on the Electoral System had recommended that the Maori seats be abolished if MMP was adopted – to prevent an over-representation of Maori in Parliament. But Jim Bolger’s National Party retained the seats to appease Maori leaders, and as a result, the predicted over-representation of Maori in Parliament has now occurred, with twenty-three percent of current MPs claiming Maori descent.

These reserved seats, of which Kelvin Davis’s electorate seat is one, are a fine example of Maori privilege.  Mr Davis is in Parliament because of Maori special treatment.

As a result of the Parliamentary leverage created by the race-based Maori seats, there are a plethora of race-based legislative initiatives that give Maori special rights. These include:

The list of statutory Maori privilege is increasing all the time, as the government’s current plans to confer race-based rights to control fresh water demonstrates only too clearly.

As justification for Maori privilege, Mr Davis and others point to so-called ‘Maori disadvantage’. But they should remember that the statistics on these matters are no longer clear-cut.

Back in the seventies, when widespread intermarriage was resulting in a sharp decline in the number of people who could be categorised as Maori, the Labour Government changed the rules. Through the 1974 Maori Affairs Amendment Act, the racial classification of “Maori” based on someone having 50 percent or more of Maori blood was changed to one based on self-identification and ethnic affiliation – in other words, having a Maori descendent. This guaranteed that the number of people being classified as Maori would continue to grow, since anyone with even a smidgeon of Maori blood could, for official purposes, be counted as Maori.

In 2000, Simon Chapple, a senior researcher with the Department of Labour, used 1996 census data to examine the impact of these new definitions. He found that instead of the 273,693 New Zealanders who indicated they were Maori-only being recognised as Maori for statistical purposes, the new policy of adding everyone who included Maori as one of their ethnic groups into the final count, boosted the official tally to 580,374.

In other words, that change in methodology effectively doubled the “official” number of Maori. Simon Chapple recommended to the Government that the Maori ethnic group should be restricted to those who identify as Maori-only in the Census, with everyone else allocated to their other major ethnic group. But his suggestion was ignored. As a result, so-called Maori disadvantage is overstated.

In addition, a fact that Mr Davis and others like to conveniently forget, is that while people who claim Maori ancestry might appear to be over represented in our worst social statistics, the causes are well documented and include long-term welfare dependency, solo parenthood, child abuse, and educational failure. Skin-colour does not predetermine one’s future.

TVNZ denied the accusations of racism being made against it. The Canadian firm Vox Pop Labs, which helped to design KiwiMeter – along with input from Auckland and Victoria University political scientists – refuted the racist allegations as “categorically false”.

But Mr Davis, no doubt with his own self-interest in mind, remained adamant: “I think it’s offensive, I think it’s racist, and I think it should be pulled.”

While Labour leader Andrew Little also condemned the question, the Prime Minister defended it, saying it was a legitimate question to ask. “There was nothing wrong with asking a question, to get a sense of what people’s views are. People ask questions all the time about potentially controversial things, we live in an open society and people are free to ask a question.”

John Key is right. In this country – at least at the present time – our rights to free speech are protected by law and guaranteed under Clause 14 of the New Zealand Bill of Rights Act: “Everyone has the right to freedom of expression, including the freedom to seek, receive and impart information and opinions of any kind and in any form”.

However, the right to say whatever we like is tempered by the Human Rights Act, which makes it an offence to express opinions that could be deemed to be ‘threatening, abusive, or insulting’ on the grounds of ‘colour, race, or ethnic or national origins’.

While the Human Rights Commission indicated they were looking into complaints of racism against TVNZ, their website explains, that our right to the “freedom of expression” means that people can make highly controversial or unpopular remarks, and while they may be regarded as offensive, unless they are likely to cause or exacerbate serious ethnic tension or unrest, no action will be taken: “Only where there is the potential for significant detriment to society can the right to freedom of expression be limited”.

The right to offend is at the heart of robust debate about controversial matters. As British comedian Rowan Atkinson explained, “The freedom to criticise or ridicule ideas – even if they are sincerely held beliefs – is a fundamental freedom of society. In my view the right to offend is far more important than any right not to be offended. The right to ridicule is far more important to society than any right not to be ridiculed because one in my view represents openness – and the other represents oppression.”

David Round, a law lecturer at Canterbury University and this week’s NZCPR Guest Commentator – with a speech he delivered at the University’s commemoration of the 800th anniversary of the Magna Carta – is no stranger to free speech and controversy. He remains undaunted, upsetting many sensitivities when he used his address to denounce the “deplorable shortsightedness and stupidity on the part of our political and intellectual class”, who claim the Treaty of Waitangi is a “Maori Magna Carta”:

“Now ~ in our own day, and in our own country, there is a mythologizing and a flagrant misinterpretation, as notable and as bizarre as any seventeenth century deification of Magna Carta, of a certain document. That document is of course the Treaty of Waitangi, sometimes referred to as ‘the Maori Magna Carta’. This brief general memorandum of understanding recorded ~ not just in the English translation but in the Maori original ~ an agreement that the Queen should be sovereign over New Zealand and that Maori should be her subjects, with the rights and privileges of British subjects ~ a position of equality before the law.

“By some mysterious alchemy the document has come to be widely understood to mean the exact opposite ~ to establish some as yet undefined ‘Maori sovereignty’ or at the least a ‘partnership’ between the Crown and Maori, or between part-Maori New Zealanders and those not of Maori descent. This process is at least as remarkable as anything that happened in the seventeenth century. It is complete nonsense to describe the current misinterpretation of the Treaty as anything remotely like Magna Carta.” David’s full speech can be read HERE.

Feigning offence is a tactic commonly used by those who want to close down a debate. By using this strategy and playing the race card, Kelvin Davis was able to divert attention away from the real issue of Maori privilege onto the question of whether or not KiwiMeter – and TVNZ – is racist.

Maori sovereignty activists are increasingly targeting the media in an attempt to prevent them from publishing anything that doesn’t suit their separatist agenda. It is going on right now, with some of the newspapers around the country that are currently running the NZCPR’s public information advertisement calling for submissions on National’s plan for the race-based control of fresh water, being targeted and accused of racism – including by the taxpayer funded Maori TV. By using bully-boy tactics, they no doubt hope to intimidate newspapers and discourage them from running such ads in the future.

And with the Human Rights Commission maintaining a register of media that publish material they deem to be unfavourable to Maori, it is clear that our fundamental right to the freedom of speech is under serious threat.

If, as a society, we value free speech, we must not allow ourselves to be intimidated into silence. For silence is interpreted as approval. In the present debate over fresh water, the government will think that those who are not speaking out condone tribal control – when that is the very thing that most will oppose.

Speaking up is vital in a democracy. Your single voice is critical. Together many voices can move a nation.

If you haven’t put in a submission opposing all race-based proposals for fresh water reform, this is our last reminder. People power is the only way to stop this – a simple email stating your position and sent to watersubmissions@mfe.govt.nz is all that is needed. And why not send your thoughts on to all National MPs (their addresses are HERE), as they are the only ones who can stop this.

Do you think the KiwiMeter statement, “Maori should not receive any special treatment”, is racist?