Mr Slippery wants to be your new Big Brother

Angry about being spied on? Don’t vote National. 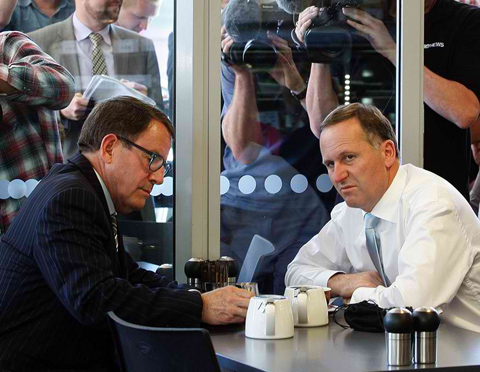 They can’t fix roads, they can’t fix poverty, they can’t fix the problem of fatherless families. Yet here stands the National party, fully prepared to implement a festival of regulatory spy tactics on its own citizens. Once again, the bogeyman of terrorism is listed as a valid reason for being Big Brother.

George Orwell’s brilliant dystopian novel Nineteen Eighty Four emphasised the dangers of totalitarianism. Suspenseful and eerily accurate, Orwell accurately predicts how dangerous the ruling elite are when espoused with increased levels of authority. “Big brother is watching you.” There is no such thing as privacy in Oceania. And when Winston Smith, the protagonist begins to rebel against the establishment, committing the crime of independent thought, he’s hunted down and treated like a pariah.

Perhaps, in his days as a currency trader, Mr. Slippery got handed a copy of Nineteen Eighty Four. Even if he’s read it, it certainly hasn’t stopped him from covering up the GCSB’s illegal spying on Kim Dotcom. Thankfully Edward Snowden had enough common sense not to flee to New Zealand, where our weak kneed government would have happily surrendered him over to the United States like a piece of meat. Basic liberties which Dame Anne Salmond listed as “human dignity, freedom of thought, and a happy, comfortable life for ordinary people” are fast disappearing under the government. Labour paved the way with Helen Clark’s nanny state dogma and here it continues as well.

For some disillusioned National voters this will be the final straw. The National party has the blood of 10 dead soldiers on its hands. It has done nothing to address the disastrous tax system it implemented. The National party has happily waved goodbye to over 200,000 of its own citizens since it came to power. The National party refused to implement effective public transport systems. Now though, National has brought back the bogeyman of terrorism in its defence for increasing the power and authority of the GCSB.

Lining up a curve ball excuse, Mr. Slippery says that we ought to look at this in the same light as the Boston Marathon bombing. This bill is supposedly for our protection. Anyone who accepts such mindless drivel need only look at the NSA. Even with access to trillions of recorded phone calls and emails, they still were not able to track and prevent the two men responsible for the Boston bombing. Why would you want to trust this current government with your safety? They’ve cut back on front line police force spending, slashed the defence budget, sunk the Navy and abolished some of the top incentives to become an enlisted defence force member. If that’s Mr. Key’s answer to protecting New Zealand, then why hope for anything better when all your phone calls, emails and so on can be tracked.

Benjamin Franklin said “They that give up essential liberty to obtain a little safety deserve neither safety nor liberty.” Power as a corrupting influence has dogged civilizations for thousands of years. Increasing GCSB powers now is the first step towards totalitarianism. Soon, governments will be able to access and prevent any criticism about them to go to press or be aired in public. Any protests will be stopped and all efforts will seem futile. Laugh all you like at this but the truth isn’t funny. It’s a concerning prospect and we ought to act on it now.

I find it amazing that an issue as trivial as same sex marriage can get so many people fired up and passionate to hold mass rallies outside parliament and flood the beehive when the final reading was done. Yet here those very same people sit passively in anticipation for a sinister bill to pass into law, which we the people are not able to publicly say anything about. Thankfully, a silent majority have not been fooled. A public meeting “Stop the GCSB Bill” was so well attended, people stood outside to arm themselves with information. Although unwilling to say so, the bill will completely transform the way we go about our lives. I’ve heard people say “You shouldn’t feel guilty if you’ve got nothing to hide.” The sole reason people are entitled to a private life is specifically so nosy politicians, governments and organisations do not monitor our interests. If the United States wants information about New Zealanders, the GCSB is only a phone call away. Do you want information about yourself being distributed overseas and sold to wicked corporations? I don’t think so and I don’t see why you should.

Down with Big Brother and down with this stupid GCSB amendment bill. It will cause nothing but trouble and leave us with nothing but further misery. John Key doesn’t care about his voters opinions and secretly he despises them. This GCSB fiasco is only one example.