The numbers on member's bills

The numbers on member's bills 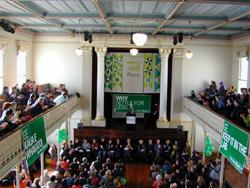 FrogBlog has an analysis of the member's bills passed, defeated, and discharged so far this Parliamentary term. The short version: three bills have been passed, and thirty failed. All of those passed have been from the Green Party, demonstrating their ability to "build a democratic coalition, negotiate and put forward sensible pragmatic solutions to problems" (though its worth noting that at least two of National's bills resulted in the desired changes, despite being defeated). It's a lesson the other parties should learn. In an MMP Parliament, with no fixed balance of power, there is a real opportunity for opposition parties to pass legislation, if they pick their issues carefully and do the hard work of building a coalition behind it - in other words, for the legislature to act like a legislature, rather than a rubber-stamp for the executive. Unfortunately, I've yet to see other parties exploit this to the same level that the Greens have done; instead, they've focused primarily on highly ideological bills aimed primarily at making public statements rather than being passed. While there's certainly a place for that ("here's what we'd do differently"), it does represent a bit of a wasted opportunity.

Do you want more? Check out Idiot / Savant's blog here.