What the smacking debate is really about 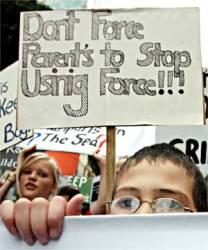 Anke Richter has a post up on Public Address which takes an outsider's look at the smacking debate. And she hits the nail on the head in pointing out what its really about: pushing cultural change:

In 1957, Sweden was the first country to make hitting children illegal. The country was divided about it then, just as New Zealand is today. But half a century later, you'd be hard put to find a civilized Swedish parent who'd raise a hand against their child -- it would be like reverting to the attitudes of the Huns and Vikings.

Other countries followed Sweden's example: not always in legislation, but with cultural change. In Germany, obedience, order and discipline had all become dirty words after the war. The radical student movement of the late 1960s brought about a humanistic overhaul of how people viewed children, misbehaviour and authority.

When I started school in Cologne in 1970, corporal punishment had been completely eradicated and wasn't missed by anyone. Twenty-seven years later, I became a mother. Long before then, smacking your child in Germany had become quite unthinkable. Good parents simply don't hit.

The short-term effect of the bill will be to make it easier for the police to prosecute those who physically abuse their children. But in the long-term, the bill will hopefully shift us from a society where violence against children is accepted and routine to one where it is unthinkable. Some will call this "social engineering". Some will argue that the government should follow public opinion, as they did in Germany, rather than lead it as they did in Sweden. But when we have some of the worst child abuse statistics in the world [PDF], I think the government is more than justified in taking a leadership role.