When the Coalition for Open Government (re)formed earlier in the month, they mentioned that they were a new version of an older group, which had campaigned in the early 80's for the Official Information Act. This tied in to another of my interests - the OIA - so I decided to do some background research. The Coalition for Open Government seems to have formed to oppose Robert Muldoon's National Development Act - a draconian planning law which allowed central government to "fast track" projects deemed to be of national importance - projects like the Clyde Dam, or the Motonui synfuels plant, or the proposed Aramoana aluminium smelter ("Think Big", in other words). The Coalition produced an analysis of the bill when it was introduced to Parliament, and then when it was before select committee, produced a weekly newsletter reporting on the committee process, with excerpts from key submissions. This was known as the Open Government Report. Funded by donations and produced on a shoestring budget (which barely paid for printing and postage), the Open Government Report was mailed out to 3,000 people each week, including MP's, officials, and members of the public.

The bill passed, of course - no MMP or troublesome coalition partners in those days - but the Open Government Report continued, though on a far less regular schedule. From March 1980 the focus was on reporting on how the National

Development Act was used, and highlighting the projects the National government was trying to ram through under it. They also acquired a new interest: freedom of information. In 1980 the Committee on Official Information under Sir Alan Danks had published their report, Towards Open Government [PDF - and kudos to the Ombudsmen for putting this online), in which they recommended the repeal of the Official Secrets Act and its replacement with a new regime in which the government would

...reaffirm its responsibility to keep the public informed of its activities and to make official information available unless there is good reason to withhold it.

A later Supplementary Report contained a draft bill, which the government introduced to Parliament in 1981. The Coalition for Open Government was scathing of the bill, viewing it as lacking teeth and granting too much power to Ministers (who originally had the power to veto a recommendation by the Ombudsman). They were also concerned about the exclusion of local government and quangoes. But they pushed hard on the bill, and contributed to the public debate on it during 1981 and 1982. Meanwhile, they also did valuable work on other issues as well - on the reform of public broadcasting, the racist Citizenship (Western Samoa) Act 1982, the Motunui outfall decision, and on plans for expanded coal mining at Huntly. In 1984 they also reported on the implementation of the OIA over its first year, and the large number of Ministerial vetoes issued by an increasingly authoritarian government. Finally, in late 1984, after the election of the Fourth Labour Government, they decided to call it a day - apparently due to an initial five year time limit they imposed on themselves. After a final retrospective issue, the Coalition for Open Government went their separate ways - though there was some interest in creating a successor organisation to monitor the increasingly important private sector (I have no idea how this turned out).

Reading back through these newsletters, its a completely different world - one in which the artificial majorities created by an unfair electoral system allowed that same government to ram through whatever legislation took its fancy, while the lack of an OIA allowed them to lie about it with total impunity, misrepresent their statistics and cover up the inconvenient projections. In order to prove that the government would have to subsidise electricity to the proposed Aramoana smelter, for example, the Coalition for Open Government had to reverse engineer the entire electricity planning system from public sources. Nowdays, we'd just demand the report, and in all likelihood, get it. While governments can still lie, it's a bit harder for them now.

And of course, it was a world without the internet. To get their message out required a team of eight or so people to write, type, typeset, print, envelope-stuff, and post several thousand copies of a newsletter, at a cost of around $500 an issue (excluding labour). Nowdays, people would just set up a blog and a mailing list. The cost of reaching people has got dramatically cheaper, and yet fewer people and groups seem to be doing it. Partly that is because MMP has taken the rough edges off government - while people rail against the current Labour government, it doesn't even come close to Muldoon or Lange in its constitutional excesses, and there is consequently less public outrage or motivation to participate. But it also seems to be a general retreat from politics as well. The history of the first Coalition for Open Government shows that politics matters and that a small group of motivated activists can make a difference. No matter where you stand on the political spectrum, its a lesson we should take to heart. 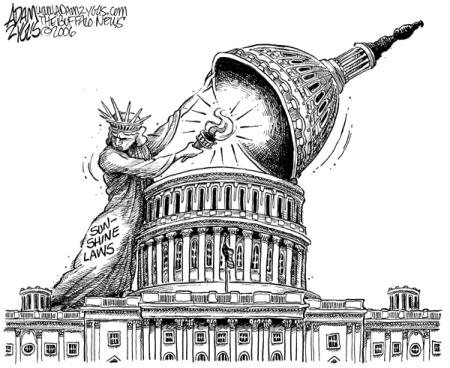