Yesterday, I pointed out that the National Party was casting around for a new source of warm bodies to underpin its "low wage, low skill" labour market policies. And it seems they've found them: prisoners. National wants all prisoners to be forced to work - but stripped of the redneckery, what this actually means is that they want the coercive power of the state used to force people to labour for lower wages than they would receive in a Chinese sweatshop.

There is a name for people kept behind bars all day and forced to labour for the benefit of others and punished if they refuse. They're called slaves. And the National Party wants to revive it in our prisons.

It's easy to see why. National naturally looks to America, and prison slave labour is big business over there. The captive population (mainly of Afro-Americans arrested for minor crime or drug offences, or incarcerated for life for trivial offences under "three strikes" laws - plus ca change, plus c'est la meme chose) are forced to work for a pittance, and their services contracted out to major corporations. Prisoners don't have union, employment, or workplace safety rights, so costs can be kept low. And if they complain about their treatment, you can beat them in the head with a stick. This return to nineteenth-century employment conditions allows US companies such as Dell, KMart and IBM to stay profitable. It also helps keep wages in the free economy down - after all, if you ask for too much, your job can always be "insourced" to prisoners instead. 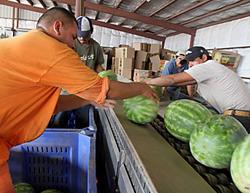 Like American-style healthcare and anti-terror laws, this is not a disease we should be importing into our country. Quite apart from the fact that it violates international human rights obligations (something even the US admits when it is Chinese prisons they are talking about) and the effects on the free economy, it is simply morally indecent. Our government should not be engaging in slavery - it's as simple as that.

This isn't to say that I don't think prisoners should be given proper training and decent work for decent wages if they want it. These things can play a useful role in rehabilitation. But it must be done under the same standards that apply outside prison - it must be voluntary, paid at full market rates, and with the full protections of employment law. Anything less is exploiative, indecent, and wrong.