On Monday, the Campaign for Open Government announced that it was reforming to pursue tighter and more transparent election finance laws. It's a goal which is vitally necessary in the wake of the unprosecuted abuses of the 2005 election (abuse of public funds, a convenient "mistake" which saw national spend $112,000 more than it was entitled to on television advertising, and a dodgy negative campaign by the Exclusive Brethren church which violated the spirit (and in some cases, the letter) of the law). The COG's draft proposals can be found here; DPF and Jordan have already commented on them, so I thought I would too.

As a general framework, the purpose of election finance laws is twofold: to preserve democracy by preventing the rich from buying elections, and to prevent corruption and ensure proper accountability in our political system. The former is achieved by a variety of methods - supply- or demand-side controls on how money may be raised or spent, or public funding to ensure that parties are less dependent on a small pool of wealthy donors. The latter is primarily served by transparency. The Campaign for Open Government's proposals serve both these ends. 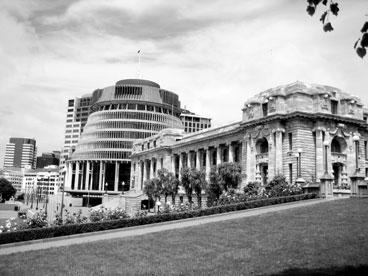 This is pretty much a no-brainer. In order to ensure that our politicians are behaving properly, we need to know who else is trying to buy them. The current practice of anonymous and laundered donations subverts this, and results in our knowing very little about who is trying to buy themselves influence over a potential government. The ideal way of ending this practice is to require every donation above the level of pocket change to be declared, and impose criminal penalties for attempts to subvert it by fronting or laundering donations. Parts of the US do the former (and stick it all online so people can search through it by candidate, donor, or anything else which suits their fancy), while the UK does the latter. While there is a privacy concern here, IMHO it is outweighed by the need to preserve the democratic system; retaliation or persecution of donors by employers can be dealt with under s21 (j) of the Human Rights Act 1993, which prohibits discrimination on the basis of political opinion.

2. Limiting the size of large donations

This is aimed fairly and squarely at limiting the ability of the rich to buy themselves undue influence over parties, and I think it is a damn good idea. One of the themes in The Hollow Men is how the National Party was effectively bought out by a small clique of very rich donors, who used large amounts of laundered money to buy themselves unparalleled access and control over the party's agenda, at the expense of the wider membership (National isn't alone in this; the same group bought the Labour Party in 1987, with one of them infamously handing Roger Douglas a million dollar cheque for his services). Capping donations will prevent this, and force parties to rely on their broader membership rather than a handful of secretive wealthy backers. It may also limit the amount of money received by parties, helping to prevent the funding arms race which is clearly developing.

This is the trickiest problem. Elections aren't just about the parties, but also about the people having their say; it is vital that individuals and groups are able to participate in the public debate, purchase advertising and campaign about issues important to them. At the same time, all the funding restrictions in the world mean nothing if the rich can simply sidestep them by setting up front groups and sockpuppets to work for the election of their chosen candidates. Current electoral law recognises this, by requiring disclosure and forbidding third parties from advocating for the election of any particular party (unless authorised by that party, in which case it counts as their expenditure) - but the 2005 election, with its campaign by the Brethren and the plans of the Talley brothers for a million-dollar parallel campaign to support Don Brash through an anonymous corporate front make it clear that something has to be done. Big money is getting desperate, and is increasingly willing to circumvent the law to buy itself political power and tax cuts.

There is a clear freedom of speech issue here, but the proposals - disclosure and a spending cap - are at least the beginnings of an answer. Its also one we already use - Part 3 of the Citizens Initiated Referenda Act 1993 establishes a basic regime for disclosure on advertising around a referendum, and caps spending by any person at $50,000, though the penalties are too low and there are obvious loopholes. Another possibility would be to mirror US laws which prohibit collusion between political parties and "independent" issue campaigns, which would rule out the sort of implicit management of the Brethren campaign we saw from National, or the obvious circumvention of establishing multiple, coordinated groups.

A complete no-brainer. The police's not taking electoral offences seriously in 2005 reduced the law to a joke. Either it needs to be made clear to them that preserving the democratic system is in the public interest, or the ability to investigate and prosecute such offences needs to be taken off them and handed to the Electoral Commission. Either way, the penalties need to be increased, and the current six month time limit on prosecution has to go.

I support the inclusion of polling and focus grouping around election time as an election expense. It's a political weapon, designed to help parties tailor their message and give them inside information on what the electorate is thinking. Including strategists and staff though may very well be unworkable.

If we want to remove the influence of money from politics and ensure that the electoral competition between parties is a fair one based on their merits (however defined by the voters) rather than their wealth, then we need to move towards greater public funding. Linking such funding to the level of popular support is an easy way of doing it, but runs the risk of entrenching existing incumbents and preventing new parties from effectively contesting the vote (particularly in light of MMP's unfair and undemocratic 5% threshold). I would rather see flat funding - a true "level playing field" - or funding according to the number of electorate candidates, but I can't really see the large parties agreeing to such a system.

My main point of disagreement with the COG is on the limit on broadcast funding. While I think the allocation method stinks (again, it protects incumbents and makes it very difficult for new parties to gain a foothold), the use of public funding and a cap on spending in this area is vital in preserving democracy and limiting the influence of wealth. Given the importance of broadcast advertising in deciding elections, repealing the limits would start an arms race between parties, pushing up election expenses and making them even more beholden to a narrow clique of rich backers. While the COG's other proposals will limit the amount of money parties can raise, given the decisiveness of TV advertising, I think a demand-side limit is more than justified.

For more thoughts on this issue I highly recommend Andrew Geddis' paper Rethinking the Funding of New Zealand's Election Campaigns [PDF] in the latest Policy Quarterly.