FPP is dead; get over it

My post on the big picture has attracted some attention over at Kiwiblog. But among the trolls, FPP revanchists, and those darkly hinting at political violence if defeated again, there was also a curious comment: that I am failing to take into account

the convention that the major party with the most votes gets first dibs on power.

It's a common view on the political right (primarily I suspect because being ahead in the polls they think it advantages them) but the blunt fact is that there is no such convention. The conventions relating to government formation are laid out in the Cabinet Manual, and they are quite clear: the sole criteria is the ability of a government to command a majority in Parliament. For example, in appointing the Prime Minister, constitutional convention requires the Governor-General to:

While in appointing a government,

the task of the Governor-General in the government formation process is to ascertain where the support of the House lies (or appears to lie), so that a government can be appointed or confirmed in office.

(Emphasis added in both cases). 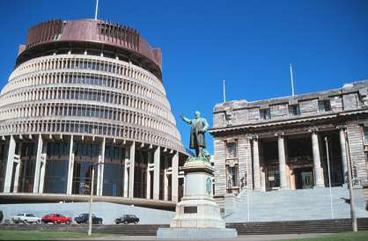 So, it's not about size or plurality; the only thing that matters is the ability to get a majority. Under FPP, plurality and majority were synonymous (at least in the age of two-party politics), thanks to the distortions of the undemocratic election system. But under proportional representation, that's no longer the case, and parties must now negotiate for power. As a pre-negotiating position, several parties last election said that they would preferentially negotiate with the largest party. But that does not a constitutional convention make, particularly when the majority of parties refused to take such a position (instead indicating a preference for particular coalition arrangements or adopting a "wait and see" approach to see how strong a hand the voters dealt them). In fact, the idea that parties should preferentially negotiate with or obediently fall into line and support the largest party becomes absurd the moment you stop to think about it. Parties are elected to represent the interests of their voters. Why then should they automatically support the policies of another party whose goals may run counter to their own? Divine right of the plurality? I thought that sort of thinking died 14 years ago, with FPP.

We live in a proper democracy now, under MMP. No-one has "first dibs" on power. No-one has an automatic right to rule. Instead, the right to form a government is contingent on being able to command a majority in the House. And if the largest party can't do that, they don't get to be the government - it really is that simple.