Yes yes yes.  The NZ Herald takes they very rare but in this case necessary step of a front page editorial against the Electoral Finance Bill.

Audrey Young reports that the Government is moving to explicitly exempt Government advertising campaigns from the Electoral Finance Bill, even if their messages are such they would normally be covered.  This comes on top of exempting any expenditure from parliamentary budgets.

The front page editorial is here. It’s all very good, but some extracts:

When is the Government going to get this message: democracy is not a device to keep the Labour Party in power.

The Human Rights Commission has described the restrictions on election activity as a “dramatic assault” on fundamental rights which “undermines the legitimacy of political processes”.

The Law Society says the bill would “make participation in our parliamentary democracy an arduous and perhaps even legally dangerous undertaking for ordinary New Zealanders”.

In the face of near-universal condemnation, the bill should have been withdrawn. Instead it will be tweaked to dilute some of its worst features. But the attempt to restrict non-party participation in election discussion will remain.

Labour seems determined to use the time it has left to skew electoral laws in its favour.

Not only does it mean to make election debate the preserve of political parties, it has introduced this month a second electoral outrage - a bill to extend the law legalising the use of public money for political purposes that were ruled improper by the Auditor General after the last election.

The Clark Government’s refusal to bow to public opinion on this subject beggars belief. It was staggering enough last year that Helen Clark and her lieutenants could not understand why nobody else regarded their electoral pledge card as innocent information.

Now, having grudgingly repaid the public purse, they are hell-bent on giving themselves the right to raid it again.

If these bills become law, politics will be largely confined to registered parties, and they will have to be able to use parliamentary funds for election campaigns. 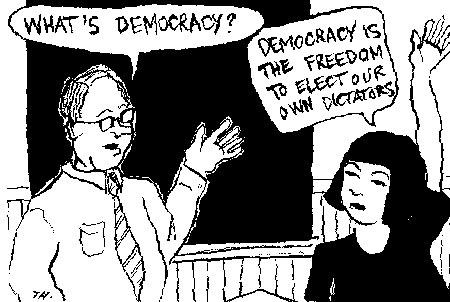 Both measures are designed to favour the party that has devised them. Labour fears independent campaigns by the likes of the Exclusive Brethren much more than National fears the efforts of the PPTA or the Council of Trade Unions. And Labour believes it needs public money to balance covert contributions to the National Party.

Parties have different advantages. If National has more well-heeled donors, Labour probably has the more committed and articulate foot soldiers.

National’s supposed advantages were of less urgent concern to Labour when it was polling well. Now in desperation it wants to screw the scrum. It has succumbed to the old conceit of the Left that the interests of the people are identical with its own.

The interests of any healthy democracy lie in unrestricted debate, not laws that favour incumbents with public finance and suppression of free speech.

If these bills pass, they will be Labour’s epitaph.

Indeed that is the challenge.  One can not stop the bills, but one can punish Labour (and allies) for passing them by reminding people of them time and time again right up until election day.

But what a superb editorial, and well done to the NZ Herald for making it front page.  These bills do matter, they do fundamentally skew our democratic framework.  They are the sort of laws, which if passed overseas, we would condemn.