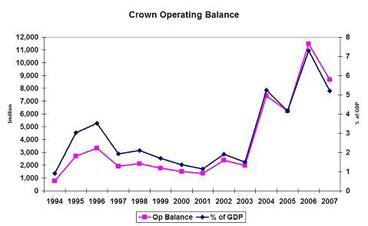 This graph shows the operating balance or surplus, since we went back into positives (thanks to Ruth and Bill). Now you can see in the mid 1990s the level of surplus got pretty high - up to 4% of GDP, so taxes were lowered, and for around five years we had
a reasonable sensible level of surplus.

Then in 2003 the level of surplus started to shoot up. And as was almost inevitable, it stayed massively high as Dr Cullen kept insisting that one could not afford to reduce tax. It reached almost 8% of GDP, which would be close to 25% of Crown Expenditure.

And remember when you look at the year just finished, that this is the year when Dr Cullen cancelled the chewing gum tax cuts because they could not be afforded. 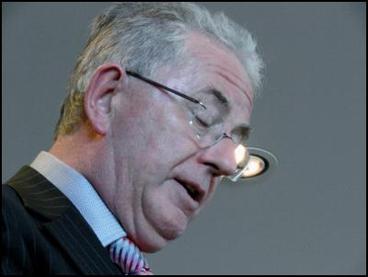 Here’s a good game to try.  When the surplus got up to $5 billion I would ask friends in Labour if that was high enough to be able to reduce taxes.  They would always say no.  So I would then ask them to pick a level at which one could agree the surplus is big enough to lower taxes.  They wouldn’t.  I cheekily suggested a figure of $10 billion (never ever thinking one would ever get a surplus so large) and asked if they would agree taxes could be reduced at that level.  They demurred, with such fortunate vision on their part.

The only correct answer, as we have found, is “never”.