The latest rumors that John Key will topple Don Brash for leadership of the National Party suggest National are serious about winning the next election and have moved on from their ‘born to white rule’ stagnation which made them such a hopeless opposition in the first years of their political wilderness. 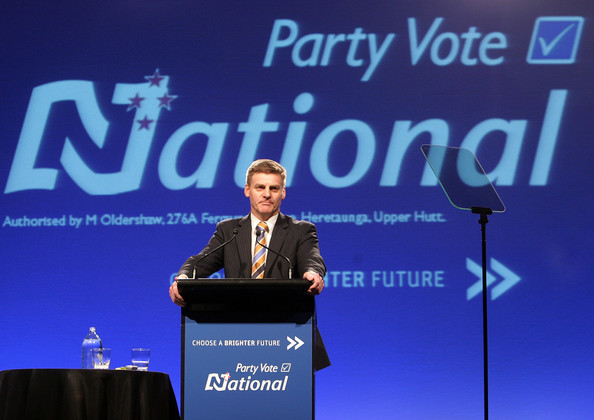 The truth is that many of the new National Party MPs represent many moderate / conservative New Zealanders who are embarrassed by Don’s anti-Maaaari rhetoric and are trying to find a way to push him off without a nasty fight. The problem is Don is very serious about being Prime Minister because behind the bungling Mr Magoo image beats the heart of a fucking sadist – look at the crap Don has said about the weakest members of society and you get the impression we have an Albert Speer in our midst. Which isn’t really where moderate / conservative New Zealanders are coming from: they want the NZ of the 1950s, where everything wasn’t PC and they weren’t made to feel guilty about being white. That said there is a deep belief in wanting to make things better, just in their ‘hard work Presbyterian’ kinda way.

But will National have the power to win the next election even with John Key? Chris Trotter makes a good point when he says National represent those who own, where as Labour represent those who work. Farmers and businessmen are the core National Party supporters and the question will be: are their interests powerful enough to eclipse those at the bottom of the heap? Confusing this picture are working class Labour supporters who loath the PC-ness of the left and will vote National for conservative social factors, even if National’s economic policies will actually hurt them (as happened in the 2004 US election of Bush). Likewise the intellectual urban vote who are really wanting a second plasma TV and some nip and tucks right now and will be eyeing up tax cuts over and above their pretensions for the poor.

But the real problem for National, is that they simply don’t have the numbers, even if they win the majority of the vote. National has no political partners and with the Maori Party and the Greens the only other two parties with any real chance of having the numbers in Parliament, Labour may have to swallow their pride and join both to make a REAL left wing Government.

To win, National party supporters may have to realize that NZ is more than farmers and businessmen, and getting rid of Don would be the first step towards that. Check the New Zealand Herald for more.