The problem with Labour

And as night follows day, post-election we have another toxic round of Labour bloodletting. Obviously there needs to be accountability in the wake of an electoral thrashing, and a leadership vote is part of that. But there are good ways of handling that process, and bad ways of handling that process. Labour's MP's seem incapable of handling it with dignity and maturity, and instead seem intent on presenting themselves as a gaggle of ill-disciplined, self-serving careerists.

Which is a neat excuse to point you at this post from Danyl about what's wrong with Labour, in which he presents a "heirarchy of political needs": 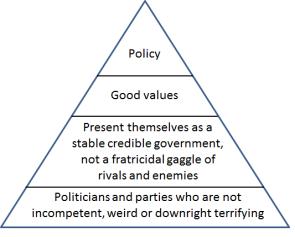 Labour does great on the top two rungs. It does terribly on the bottom two. And as long as they continue to look like a barely competant fratricidal gaggle of rivals and enemies, who can't get along with themselves let alone their potential coalition partners, people will not vote for them.

Fixing this is a problem for Labour people, not me. But if they want to be in government in future, they need to sort their shit out and change the toxic internal culture which makes this sort of autocannibalism such a regular feature of their media narrative.