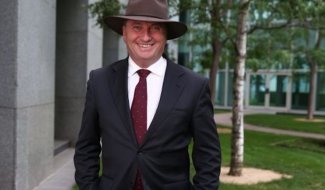 New Zealand Ministers and officials imposed a heavy security lid once they realised that they had information which could, in effect, topple the Australian Government.

That extended to not even telling Australia's Foreign Minister Julie Bishop even though she was at the same meeting last week as New Zealand Foreign Minister, Gerry Brownlee.

The realisation that Australian Deputy Prime Minister, Barnaby Joyce, was a New Zealand citizen and therefore not eligible to serve in the Australian Parliament came after questions were asked last week of both the Department of Internal Affairs and the Minister, Peter Dunne.

Except there's an obvious reason why: privacy. Information on who is and isn't a citizen is normally considered private, and its not the sort of thing you go around telling other people willy-nilly, and certainly not without telling the person themselves first. DIA seems to have acted perfectly consistently with this, and its what I'd expect them to do in any other case.