Last year, Israel lost a war. In response, the Israeli government convened a formal inquiry into what went wrong, and it has just reported back, damning the Israeli Prime Minister, defence minister, and outgoing military chief of staff for rushing to war without considering other options, or even the chances of success. Prime Minister Ehud Olmert has come in for particular criticism for "[making] up his mind hastily, despite the fact that no detailed military plan was submitted to him and without asking for one", and is now under intense pressure to resign.

America has also lost a war, in Iraq. But unlike Israel, they are still in full denial mode. Public debate on the war is shut down with accusations that it "encourages the enemy" and cries of "treason!", while attempts by Congress to investigate the policy failings that have led to this disaster have been obstructed and stonewalled. As a result, the US remains mired in a quagmire, unable to even admit its problems, let alone find a solution to them.

Glenn Greenwald attributes this to a fundamental difference in the perception of war between the two societies (or at least their leaders). In Israel, war is a serious business - and those advocating it can not escape its dangers, or remain blind to the fact that they are putting their own children's lives on the line.

When they advocate wars, they pay a price. As a result, they don't have the luxury of shutting their eyes and pretending that things are going well -- or exploiting accusations of treason in order to stifle war criticisms -- or cheering on failing wars for years for no reason other than to avoid having to admit error or feel weak.

By contrast, in the US, war is distant and costless. Oh, sure, it's cost over 3000 American lives and hundreds of billions of dollars a year - but that's abstract and invisible to most Americans, and especially to its leaders. Those who scream for war in America aren't facing any risks themselves; those are borne by the soldiers or the unfortunate citizen of whatever country the US decides to fight its next battle in. They never have to see the consequences of their actions of pick through the rubble and body parts after their neighbour's apartment block (or their own) is hit by a "precision-guided" bomb. And it's not their own kids going off to die - they go to Yale or the Texas Air National Guard instead. As a result, they can see war as

a fun and sterile video game that never requires them to pay any price -- no matter how profoundly the war fails. That is what enables them to cheer on those wars for years without end, to urge still new and more destructive ones, and to childishly insist that there is something noble and compulsory about keeping quiet, loyally cheering on the Leader's war, and pretending that things are going great and we are on the verge of success. 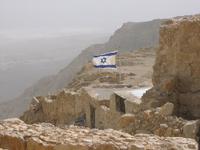 It's not a bad explanation for the difference, and for the style of American discourse over the war, but I think there's something else at play too: political culture. No matter what you think of its policies, Israel is unquestionably a democracy, with a robust parliamentary culture. America isn't. Oh, it has democratic constitutional forms, but culturally it is still a monarchy, with all that that implies about accountability and the supposed infallibility of the (elected) monarch. The stifling of democratic discourse in the US is a throwback to the time of its birth in the eighteenth century: "you can't criticise the king, especially when he's fighting a war"...