Kiwis to step into shoes of refugees for 40 Hour Famine

A minecraft refugee camp, 40 works of art, backyard box camps and sleeping in a cage are just some of the activities set to take place around New Zealand this month for the 40 Hour Famine. 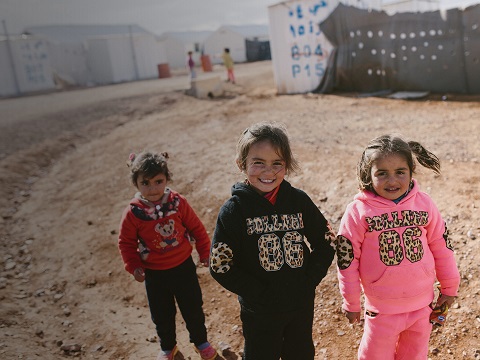 With the 40 Hour Famine approaching on 10-12 June, New Zealanders are preparing to swap their everyday luxuries for the bare necessities, taking on many challenges, including living out of a backpack for 40 hours.

This year, for the first time in 41 years, the focus of the Famine has changed to 40 Hours for Refugee Children, to address the Syria Refugee Crisis and help fund child-friendly spaces in refugee camps in Jordan. World Vision’s child friendly spaces provide education and psychological healing to children that have suffered from trauma due to the conflict and provide safe spaces where kids can be kids again.

Already 95,000 New Zealander’s have signed up for the One Weekend One Backpack challenge to live out of a backpack for the 40 Hour Famine weekend – experiencing what it would be like for refugees who flee their homes with very little.

“We’ve had phenomenal interest from New Zealand youth this year who are passionate about getting behind the 40 hours for refugee children theme. They’ve have already raised over $123,000 in donations, and we are still 10 days out from the official start date,” says World Vision New Zealand CEO Chris Clarke.

Children from around the country are taking part in walkathons, sleepovers, including setting up backyard box camps and running markets and clothes swaps to raise funds. One daredevil group of students from Wakatipu will be living in a cage for 40 hours in Queenstown CBD.

In Auckland, the Idea Collective at MOTAT will turn into a Minecraft haven as New Zealand gamers, led by World Vision Youth Ambassador Jay Adams base themselves at the venue for HungerDrive to construct a virtual refugee camp in a 40-hour live stream.

Meanwhile, World Vision Youth Ambassador Natalie Jellyman, is auctioning off 40 drawings she’s created on Trademe. Some of the artworks will be displayed at the during MOTAT HungerDrive. 100% of all profits made from the sale of her artwork is donated straight to the work World Vision is doing to create child-friendly spaces in refugee camps in Jordan.

Well-known faces will also be taking part in activities around the country in the lead-up and during 40 Hour Famine weekend, with celebrity team leaders Kimberley Crossman, Grace Palmer and Jayden Daniels heading to Christchurch to raise funds and join local school and community groups on their challenges. Adam Percival and Eve Palmer from the Adam and Eve Show are set to travel around Christchurch in a food truck selling stuffed potatoes as part of their fundraising campaign.

Meanwhile, TV presenter Shannon Ryan is walking 40km in America and The Edge SMASH 20 hosts Marty Hehewerth and Steph Monks will live out of backpacks.


In addition to the ongoing support of the nation for the 40 Hour Famine, the government last month announced that it will put up $2.5 million in matched funding for Kiwi NGO projects to help scale up their response to the Syrian refugee crisis.

“It’s truly rewarding to see the government’s recognition of the engagement and efforts of the students to raise money through the 40 Hour Famine, and its ongoing investment in World Vision’s work for the Syria refugee crisis,” says World Vision New Zealand CEO Chris Clarke.

ABOUT THE WORLD VISION 40 HOUR FAMINE
World Vision 40 Hour Famine is New Zealand’s largest youth fundraising event. Since it started, in 1975, the New Zealand 40 Hour Famine has raised over $74 million and brought hope to thousands of children living in poverty in more than 40 countries. Each year more than 100,000 young Kiwis participate in the 40 Hour Famine.
This year, thousands of young people across New Zealand will live out of a backpack for a weekend and raise money so World Vision can provide a safe place for children to learn and play. Not all Famine participants this year are expected to do the One Weekend, One Backpack challenge – participants are setting other challenges that suit and appeal to them.