Another thermal generator shuts down

Mighty River Power will be shutting down its Southdown gas-fired power plant at the end of the year: 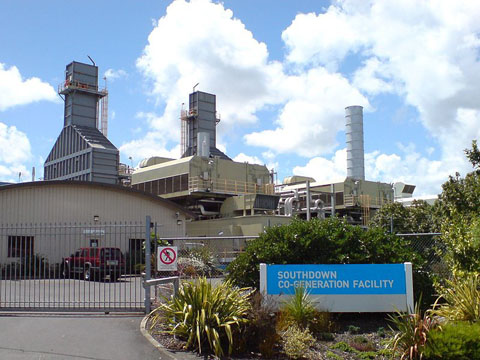 Mighty River Power will shut down its gas-fired Southdown power station in Auckland at the end of the year and sell the plant on the international market.

The company said the 140MW Southdown station in Auckland had played "a very small role" in MRP's portfolio in past two years, representing just 5 per cent of its generation, and meeting less than 1 per cent of New Zealand's total electricity demand.

It means the company will generate from its renewable hydro stations in the Waikato and geothermal plants around Taupo.

This will mean Mighty River will join Meridian and Trustpower as being all-renewable electricity companies. But it also points towards the limited future of thermal generation in New Zealand: it can simply no longer compete with the renewable alternatives. Which suggests that when Contact Energy's Stratford and Otahuhu B stations - both of which are a similar age to Southdown - reach the end of their lives, they'll be similarly dumped.But its not something we want to leave to chance, especially with a target of 90% renewable electricity by 2025 to meet. Labour enacted a ten year moratorium on new thermal electricity generation, which National immediately repealed. But it was a good idea, which will push the market towards sustainable solutions at a crucial time when it will be considering replacing old plants. While we're obviously not going to see any progress on this under the current government, hopefully we'll see a thermal ban as a central plank of the next government's energy policy.