The torch of shame's trip to Paris degenerated into the same sort of farce seen in London. Despite being surrounded by a 200m security cordon, with 3,000 police on foot, motorcycle, and even rollerblades (the same level of security normally used for a visiting head of state), the torch was almost grabbed twice, and was extinguished three times and transferred to a bus in an effort to hide it from protestors.

The security cordon is so wide that ordinary spectators can hardly see it. Instead, all they can see are security goons. One Frenchperson quoted in the IHT compared the scene to the streets of Lhasa, and they're not entirely wrong.

Meanwhile, in san Francisco, the torch's next destination, they're planning to corral protestors into "free speech zones" well out of sight of the actual route. First Amendment? Apparently they don't do that anymore. Still, it makes the point rather brutally: the only way the Olympic torch can have a free run is by the widespread suppression of freedom of speech - a point also made by cartoonist Pat Oliphant: 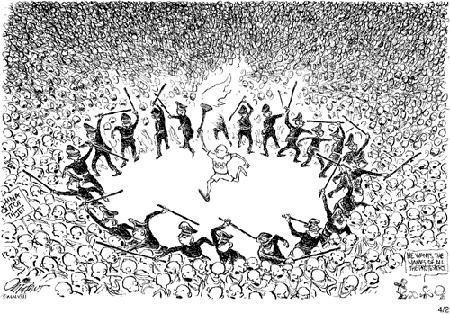