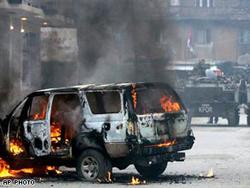 Since the declaration of independence from Pristina, all semblance of government and rule of law in northern Kosovo has broken down. In the latest incident, UN police and KFOR (NATO) troops have been forced to withdraw under attack from angry Serbs.

As these incidents, which were not anticipated (at least publically) by many in the international community - continue, and if they worsen, for example - a protestor is shot/killed by KFOR, it risks sparking armed resistance to Kosovan authorities and KFOR - since such armed resistance seems to be a proven path to successful secession.

To have any sense of credibility, the international community, which backed independence for Kosovo from Serbia, should also back partition of northern Kosovo, returning northern Kosovo (comprising 15-20% of Kosovan territory) to Serb jurisdiction in return for Serbian recognition of Kosovar independence.

This solution is presented on twin bases: One, Serbs may not be willing to tolerate Kosovo or KFOR authority over their communities/enclaves. This presents a problem in terms of law and order, potentially creating a region of lawlessness which would plague neighbouring countries - hampering development as a result. Two, the Wilsonian principle which saw the secession of Kosovo is only legitimate, provided quid pro pro, that Serbs, many of whom claim Kosovo heritage since the pivotal battle in 1389 against the Ottoman Turks, receive the same judgement. Otherwise, the Wilsonian ideals simply become distorted into an anti-Serb tool, prolonging that country’s isolation from the international community.