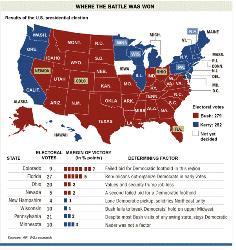 The table above shows the 51 states (including DC) which get to vote in the November US election, and who has won each state in the Democratic Primary, and by how much. It is sorted by most to least electoral college votes.

Of the ten biggest states (comprising 256 of the 538 electors) Clinton has won eight, and Obama just two (one his own).

Obama is still highly highly likely to be the Democratic nominee. But his inability to win in the larger states does mean those lingering doubts about him grow. And Clinton is not going anywhere as Maureen Dowd points out:

Now that Hillary has won Pennsylvania, it will take a village to help Obama escape from the suffocating embrace of his rival. Certainly Howard Dean will be of no use steering her to the exit. It’s like Micronesia telling Russia to denuke.

Meanwhile Clinton is going more hawkish than the hawks. Look at this:

“I want the Iranians to know that if I’m the president, we will attack Iran,” Clinton said. “In the next 10 years, during which they might foolishly consider launching an attack on Israel, we would be able to totally obliterate them.”

Hey if MCain wins, maybe she can be Secretary of Defence