Australia deports another refugee to torture

What a surprise: a refugee Australia refused to recognise was tortured after being deported: 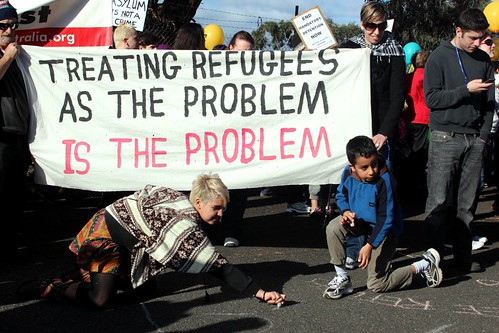 Mr Naseri arrived in Australia by boat in 2011 and spent time in detention before being granted a bridging visa. He was deported from Australia in late August after his refugee application was rejected by the Immigration Department.

Mr Naseri was reportedly abducted and tortured by the Taliban for two days but managed to break free from chains around his leg using a rock.

He said he was kidnapped while travelling from Kabul to his home district of Jaghori, along the same stretch of road where Australian-Afghan Sayed Habib Musawi, also a Hazara, was reportedly killed by the Taliban last month.

Mr Naseri told the ABC he was targeted within weeks of returning to Afghanistan because militants found evidence linking him to Australia.

"They found my [Australian] driving licence, then they understood I was from Australia. They beat me, they said 'this boy is from Australia, that country is full of infidels'," he said.

Whether an attempt to claim refugee status will itself lead to persecution is something that is supposed to be considered as part of an application for refugee status. But the Australian government pretty obviously ignored that risk, in violation of the Refugee Convention, the ICCPR and the Convention Against Torture. Sadly, I doubt this is the only example.