Getting frank with Oscar Kightley 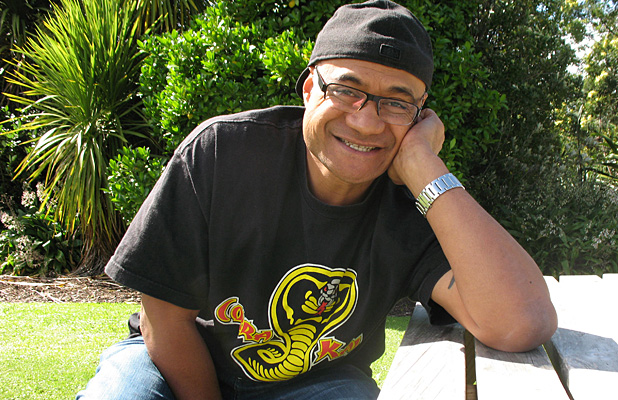 “I freak out that people even know my name. Most of the time I’m looking at the ground trying not to be noticed.”

Ambling in to our meeting at Occam café in Grey Lynn on a brilliantly vivid and sunny spring lunch time, Oscar  is a low key figure in dark cap and hoodie. He’s around 5’ 9”, average build and wearing his signature designer glasses. We settle in for a rambling conversation about fame and his career path, New Zealand comedy, how unique Auckland is (and Grey Lynn in particular), the creative process, rugby - and Don Brash.

Born Oscar Vai To'elau Kightley in Apia, Samoa in 1969, he immigrated to New Zealand at age four. Kightley then grew up in Te Atatu in West Auckland, attending school before leaving at the end of 6th form. He concedes that he was no angel there. “We were pretty naughty, we weren’t the good kids at school, but we weren’t the mean-as hard-ass bullies - we weren’t those kids, but we didn’t always do what we were told. We had fun at school. We weren’t overly studious, or overly bad – and those were always fun kids at school. You woulda liked hanging out with us.” When he left school, he scored a job at local newspaper the Auckland Star as a cadet reporter and covered everything from crime to sport to local body politics.

Kightley is still fond of those four years. “I loved it. I mean, I’m glad I don’t do it any more because I don’t think I could handle the discipline of it, but I’m really glad that I did it. I didn’t go to University so for me, working at the 'Star was like University because I met people and was in situations and learned about things that I wouldn’t have been exposed to, had I just left school and gone to some sort of tertiary education or tied myself to one institution or job. It was an awesome thing to do, especially growing up in Te Atatu North, where you pretty much stick among your own kind.”

Creative people often struggle to reconcile their natural impulses of spontaneity and randomness with the more structured demands of trying to make money out of their talents. Oscar reveals his key to overcoming this dichotomy was “Finally taking myself seriously. Because other people don’t until you do. Now I’ve got a manager. Before I was … always letting people down (wry grin), double booking myself, not turning up to gigs, and that just gives you a bad rep, and your goodwill breaks down, and you don’t earn as much money! And now I’ve got a manager, who’s got an assistant, who runs all my schedule and calendar, and I just have to be smarter. That allows you to use your creativity as your job, to just throw yourself into your energy, as opposed to having a job, and then just tapping away for half an hour every night. If you’re going to be a writer, be a writer! If you’re going to be an actor, be an actor. Yeah you need a day job! In this country you do, that’s the reality. But make that your A plan, not the B plan. Make your day job the B plan that backs up the A plan. That allows you to develop your craft and be better, because you spend more time on it and learn about it. But at the same time it has to retain a certain ‘organic-ness’, because you can’t be so business like that your head becomes all robotic. So it’s a juggling act, but you definitely do need to be more organized – it does pay off and help you.

He is humble when acknowledging his increasing success in the mediasphere; frank putting it to him that Bro Town has been rating its pants off in its first three seasons, with the latest series winning it’s time slot across several demographics. Kightley acknowledges that now in it’s third season, it is “becoming a favourite with kiwis. It’s not even about, ‘hey let’s check this out and see if it’s any good’, it’s almost like … our Simpsons. Just like we watch Shortland Street – it’s our soap opera… And I never say anything about people that I couldn’t say to them, to their face. And if I couldn’t be rude about them to their face, then I wouldn’t be rude about them to the media, or on the radio, or on the tv. That’s just cowardly, that’s lame. And it’s abuse of power, you should use your powers for good not evil.”

And you have to have that self-deprecating thing going on before you can rip the piss out of someone else.

“ Well, Pacifics Islanders and Maoris… and Kiwis! Have developed a really self-deprecating humour, that does have a self-deprecating strain through it. It’s partly in response to being over-represented in the lower socio-economic statistics. I use this example a lot: you wake up, you’ve got no lunch for school. What’s the easiest way to cope – laugh. You wake up and you wear your brother’s uniform, and of course white kiwis have experienced this as well, you wear your big brother’s uniform. You’re embarrassed, but you don’t go ‘aw shame’ you just laugh about it, and make jokes. It’s weird; you get a hiding, you go to school with a black eye or whatever but your mates help you feel better. You laugh about it; it’s totally a coping mechanism. So we’re just being able to channel that into… a force for good, I hope.”

It certainly seems that way. I don’t hear you getting any criticism for what you do.

“Oh we get criticism. We get criticised a lot heheh. There’s one idiot academic woman from Auckland University claimed that we… create Polynesian stereotypes. Not that we create them, but that we’re bad for them. That we endorse them I guess. We do I guess.”

Who the hell broke her funny-bone! What are you supposed to laugh at?!