Representing New Zealand  is far from a foreign concept to Mark who swam for New Zealand at the Commonwealth Games in 1990 and at the 1992 Barcelona Olympic Games, throw in the mix a Juris Doctor degree from Columbia University, New York, a diploma in International Law (Hons) also from Columbia, a MCom (Hons) in Economics, and Bachelor degrees in Commerce and Arts from The University of Auckland and you’ve clearly got a man on a mission to get things done.

Frank had the privilege of catching up with Mark in the build up to NZX’s launch of a derivatives market for the dairy industry to find out what makes the man. 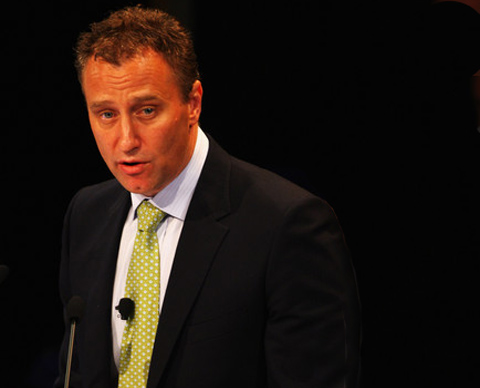 Out of the 10 questions this to me is the most difficult, I would say it would be determined and situational in the sense that my role at the moment requires some commercial skills and decisions and managing not just a business but a whole bunch of intangibles outside it.

So definitely situational, being conscious about what you’ve got to bring and at what point of time and probably being brave, I think I’m reasonably willing to take some risks and try to do things a bit differently.

Success for me is, say if for example I’m swimming and I feel complete about the thing that I’ve done.

The definition of success is an internal one not a external one, it’s not about a number, money, it’s not about what newspapers say - it’s about how I feel, because you can’t bullshit yourself and I think that’s one of the most important things to be aware of when you’re in a position of leadership - you can get into the habit of bullshitting yourself.

I missed more days at school than what I went to, I was very sick as a kid so my mother use to pile me up with books, choosing three is quite hard. I consider the best books I’ve read though are the ones that put me in a completely different world.

War & Peace this I read while on Easter Island. It’s an unbelievable narrative and is as compelling as any Bourne Identity / Robert Ludlum like book. It intersperses with a philosophical fight between a general that wants to manage the army in a completely prescribed, perfectly planned manner with another general whose view is that on the battle field chaos matters and what is most important is having people who are trained to make good decisions.

It’s an incredible story, and it’s the sort of book that you keep putting down and going ‘Wow’. So that’s an awesome book, my only advice on it is don’t try and read it 15 minutes before going to bed take it on three week holiday and chew through it.

There’s also a book called The Glass Bead Game that I enjoyed a long time ago which is just a really interesting book about a guy going through a pretty challenging journey in which he finds himself in a successful position and decides to exit to do something quite unexplainable to a number of people which leaves him feeling a lot happier about it.

And then there is a biography of a guy called Sakharov who was a Russian nuclear physicist who won a Nobel peace prize, and this guy had an incredible amount to do with orchestrating resistance within Russia and he was just an incredibly brave man and the way he lived his life and his impact on the fall of communism. It’s an incredibly well written biography

Space and distance, being in different environments and situations – such as being in really large cities or being on a mountain – just being outside your usual daily life.

What motivates you, and how do you stay motivated?

I think is the most honest way to measure your motivation is when you wake up in the morning, do you get straight out of bed or do you press the snooze button, you can’t kid yourself with that.

I think your natural level of energy is something you can override during the day with cups of coffee and you can just keep going because you’re doing something.

The way I know if I’m doing the right thing is the way I feel first thing in the morning with levels of energy, so I monitor that.

It’s pretty important for me to exercise especially when you’re running an organisation or in a position of leadership you get a lot of shit thrown and that’s a function and a key part of the job to absorb that and then just get rid of it, if you’re a rolling door and you just amplify that into your company and staff - you’re doing the wrong thing.

So I swim a lot and make sure I eat healthy and that’s how I get my short term balance back.

I always will have a list of what the most important things to do are.

To some may seem as an odd thing but I don’t have a television and I’m really disciplined about the time that I’m not tethered to a device because I just find devices compete for your level of attention.

When you run a business, your product is about making really good decisions, technology generally doesn’t allow you to make great decisions, you’ve got to spend the right amount of time tweaking and talking to people to make a great decision.

Part of the great thing for me is making sure I’ve got enough time sitting at home listening to music or whatever it might be, not continually on a machine and being pretty clear about the importance of that.

Brave, you know I studied in America and everyone told me that was stupid because law doesn’t travel, I got told I was staying at university too long, what did I need another degree for? But you know I was interested in it.

& disciplined, setting goals and figuring out how to get them.

What do you do when you hit a low or things aren’t going your way?

There are I think two sorts of low, there’s when you obviously have a failure and I don’t find those ones so bad as there’s a thing that’s happened and the fact that it happened is just a fact and getting emotional about a fact is quite difficult I think, the fun and inspiring thing to do is to try and learn from it and those are good opportunities.

The harder ones are those slow niggles where you know something’s not quite right and you can’t quite figure out, and honestly I still haven’t quite figured out to do about those ones [Laughs]

In the short term it’s launching dairy futures market which for New Zealand dairy is our most important industry and there’s very few countries in the world where your most important industry is naked, where they’ve got no ability to hedge risk. That will round out the capital market infrastructure, the exchange platform almost completely from when I first started the job.

That’s a defining piece of the puzzle, building all the platforms at which point it becomes about sticking more stuff on it.

What is the most important piece of advice you'd give to an aspiring leader?

Whenever I hear the word advice, I think about the song ‘Sunscreen’ the famous valediction speech from Chicago something along the lines of ‘advice is just a form of nostalgia packaged up and resold’ so I’m always a bit reluctant to answer a question that is called advice.

The only thing that I’m quite convinced of though is that you are better off trying to manage your energy than time, as your energy can be enormous or it can be tiny where time is finite, and energy is not and if you focus on managing your energy, making sure that you’ve got that hour out.

Making sure you’re not always tethered to a device, go for a swim or whatever works for you then you’ll be surprised how much stuff you’ll get done.