Getting frank with Joe Rokocoko 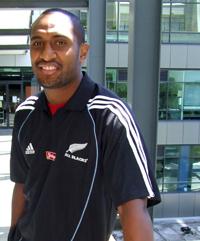 You could argue that Joe Rokocoko (pronounced rock-o-tho-ko) is the missing link between John Kirwin and Jonah Lomu, balancing the former’s sheer pace and flair with the later’s strength and warrior spirit determination. With his own significant helping of grace added to the equation. An ingratiatingly down to earth guy in the flesh, Joe was one of the youngest All Blacks in history – and one of the most prolific try-scorers. Young Roks, as his team mates call him, got the call up for national duties a week after turning 20 – before he’d even had a chance to represent his provincial side.

At six foot two and ninety eight kilograms, he’s certainly bloomed since he was brought into this world as Josevata Taliga Rokocoko in tropical Nadi (pronounced Nandi), Fiji on June 6, 1983. Aged five, Joe and his family were uprooted by his father to go look for work in the slightly less tropical and considerably more metropolitan Auckland, New Zealand.

Joe diligently worked his way through Papakura High School until receiving a scholarship to go to St Kentigern College in Pakuranga. His career as a schoolboy rugby player was notable, one of a select group that’s represented New Zealand in under-16s, under-19s and and under-21, including playing in all four matches of the under-19 side that won the Junior World Cup in Chile in 2001. Then on June 14 2003, after playing for the Blues in the Super 12, Rokocoko slid on his first All Blacks jersey for a series against England. Tryless in his first game, Roks quickly set about demolishing try-scoring records like an F-16 fighter jet strafing a convoy of mini-motor bikes. Ruthlessly.

Ruthless is a word that never comes to mind as a descriptor of Rokocoko in his presence, but his statistics speak volumes that his persona doesn’t. In the second game against England on June 19 – he scored a hat trick. Then he scored another hat trick that season (he’s scored three hat tricks so far). He proceeded to break the All Black record for the most tries scored in a single season, (jointly held by Lomu & Christian Cullen) and did it in his debut year, with seventeen tries in twelve tests - equalling the world record held by Daisuke Ohata of Japan. He then upped that to twenty five tries scored in his first 20 tests. 2003 new player of the year as voted by the IRB Players Association. Not a bad entrance to world rugby you might say.

As from the end of the 2006 season Josevata has scored 35 tries in 39 test matches. He’s 23. Barring injury he could theoretically go on to terrorise the next three Rugby World Cups including this year’s , so if you’re betting on him to continue breaking records you won’t be alone.

It must be an unusual feeling to come out of nowhere, just your normal everyday ‘Joe’, and set world records throughout your debut season. Joe demurs, “I don’t really think of it like that, but when you keep playing later on in the year, you do. Because when you’re young you don t think about it much. You think, ‘oh it’s cool’. But later on you think it’s something special, I mean it’s something that is written; you’ve achieved something.”

I guess at functions and stuff, people draw attention to it.
That’s true. It is something that I will cherish in my rugby memories as well. Don’t know if it will be the same this year but you know…

Is trying to set or break records like that, is that much of a motivation for you?
A lot of the motivation for me is to do the best I can, the best I can for playing for this team. Not going to be here for life obviously. I am just concentrating on the amount of games I can play for the team.

Getting back into the Blues would be a good start. The Auckland team at the top of the 2007 Super 14 points table has been conspicuously reticent about returning their ‘protected’ All Blacks to on-field duties. Twisting an ankle just as you’re freed up and eligible must be pretty frustrating for a guy who’s even faster than Doug Howlett – a former New Zealand under-twenty 100 metre champion. In fact, Rokocoko’s cheetah-like pace clocks in at 4.66 seconds over 40 metres  - and with cousin Sitiveni Sivivatu he’s said to now be even quicker following the 12 week reconditioning program he’s been on. Although when asked who’s the fastest Rokocoko reckons that he, Howlett, Rico Gear and Sivivatu are “all about the same.” He wears humility like it’s Calvin Klein underwear.

There is one player he’s played against that he admits he takes a bit more seriously than most when it comes to pace. “There is one fast guy who I won’t give space, a Stormers winger, black dude. Chavhanga. He is quick man, I knew the way he chased the ball and stuff I thought whoa. If I give him some more space he’d be gone.” He’s the sort of guy you want to be paying attention to when you’re doing your homework on your next opposition then. “At the start of the week we do that, we analyse the team itself, their strengths and weaknesses, then later on in the week we split into units, look at the back lines, look at their weaknesses, what they like to do. Then later on in the week you do one on ones with your opposition players.”

But when you mention the World Cup, it’s Les Bleus that Joe rates as the biggest threats to All Black dreams of regaining the William Webb Ellis cup. More even than the Aussies, who after a terrible season - and an unbeaten season for the All Blacks, came out to defeat the All Blacks in their one decent game of the season, ending New Zealand’s hopes in the semis. “That’s the thing, that’s what I mean, it can just take one game, one game. Thirteen wins and you can have one game in the semi-final that can affect your whole year. I mean it’s just… you never know what will happen so you always make sure during the week, at the start of the week, we have to make sure we are ticking every box and the routines are always the same.”

Next week: we talk about living in Auckland, discuss Polynesian rugby, and how All Black culture has evolved.