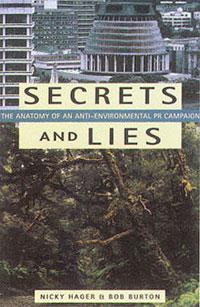 Before ‘Corngate’ there was the second big story to make Nicky’s name: the Timberlands saga as revealed in his book Secrets and Lies. Timberlands was a State Owned Enterprise that ran logging on the South Island’s West Coast and they were aiming to log huge swathes of native forest. It was another case where Hager had been leaked “a big pile of documents, in that case from the public relations company running the Timberlands campaign. They employed a public relations company to see a front activist group to make all these outlandish claims that didn’t reflect the views of the people and to try to figure ways to stop funding to the conservation groups and heavy scientists who were supporting the conservationists.”

This is the sort of manoeuvring that’s straight out of Nicolo Machiavelli’s “The Prince” – a mediaeval, definitive text on how to obtain, and keep, power, that’s usually cited along with Sun Tzu’s “The Art of War”. Ie if you want power, you have to fight, be ruthless and take no prisoners. All very underhanded, colourful stuff that’s perfect fodder for a book, especially when you start getting raw material from the inside… Hager saw it as “a splendid case study of how public relations campaigns can be run”, and it ended up being his first come-out-before-an-election book, arriving just before the 1999 election. “It was very controversial for Jenny Shipley at the time. She had been the minister in charge of Timberlands, including things like getting her secretary to ring up to instruct Timberlands that there were pieces of graffiti they might want to take down. So she was very involved in the campaign.”

Not a good look. So the Ship’ sailed. Well, sank really, National lost that election and eight years later Helen Clark and the Labour Party are still in charge. A wee by-product of Hagar’s aim to develop a public discussion of what PR does in terms of politics and media, because “the role of public relations is absolutely enormous and there is practically no writing about it. You get one or two feature articles a year saying there are these spin doctors around but very few people dig into to what they do.” Secrets and Lies then, was meant as a case study. “Timberlands… were pretty seriously discredited when their tactics came to light and there was a change of government soon after and all the forests were put into national parks; not because of my book, but in part. Timberlands didn’t have any friends anymore especially not in the Labour government. So I think I had a substantial effect on the politics at the time.”

Nicky’s modus operandi is relatively straightforward. He reckons there’s an abundance of big issues, subjects and stories that are currently lurking beneath the surface of the mainstream media, so he chooses one he thinks could be interesting, puts it on his would-be-good-to-do list, reads up on it, looks for sources and monitors what’s happening with it. “Some of them will come together, some will be on the backburner for more years yet. But for example I am half way through a book on military things when this National [Party] thing came together and I have other things to go onto, so I just have a series of things that I work through.”

So can you tell us about any other things that you are currently working on that are on the back burner?
I’d rather not really. 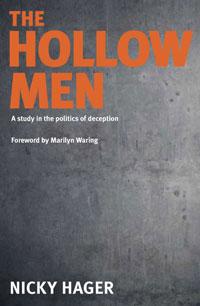 Each of his books shares separate, but inter-related themes, but all try to illustrate bigger issues about how politics works, and in particular the problems with how politics works. The Hollow Men has made something of a splash in this regard, leading to the leader of the conservative National Party Don Brash first resigning as leader, and shortly afterwards resigning from politics altogether. Something that seems to jar abruptly with the whole ‘honest Don’ image that was, we discover, carefully constructed for him. Hager pleads that his strategy for this book was to try and have less media coverage, “which is very ironic in retrospect. My concern with my previous book was the amount of news explosion around the launch - that many people may have felt like they may not need to or want  to read the [book] because they already felt like they knew what was in it. We were going to launch it quietly one evening and not time it for the media and so on. But things didn’t work out that way.” A dab hand in understatement you could say.

Don Brash played an excessively poor tactical game and blew it out massively.
It still would have been quite big because there was undeniable things in the book that would mean he would never be able to keep his job and I knew that, but I wanted those things to seep out.

Can you give us a bullet point list of what those things are?
It’s a very long list. It’s a very wide picture, even on its own, just the first chapter, the chapter on the Exclusive Brethren. There was just such specific and undeniable lies that your toes curled up and you just felt awful when you got to the end of it. That there was just no doubt how much they were just calculating, lie after lie, him and his staff.

From what I have heard, it exposes extremely low Machiavellian politicking - that the public has been exposed to anyway.
When the news of the Exclusive Brethren came out during the election campaign, I’ve got the media notes written for Brash, day-by-day for him to weasel out of it. And so you can read right down to “if they keep pressing you look  a bit agitated and if they keep going look more agitated” and it actually quotes him the next day doing this and it gets more…It kind of gets you in the guts because it’s so real.

So you were expecting Don Brash’s resignation with the publication of the book?
I wasn’t expecting it to be so fast. I thought that they might do what they did to cover the affair allegations and that was to huff and puff and say he couldn’t possibly leave now because it would look like it was because of the book and then he would quietly leave in January or something. I was shocked at the speed of it.  I knew he couldn’t continue as leader.

Do you think John Key may have been a factor in the speed?
The thing about the book is…

Because he is painted in a rather unfavourable light in the book as well.
He has certainly told exactly the same untruths about the Exclusive Brethrens that Don Brash did. I am quite confident in that. The thing about the book is it wasn’t a book about Don Brash or Don Brash’s emails and that was what people assumed in advance. It was a wide sweep of the National party with a lot of senior people who have shown in great detail… It is about campaigning and internal dynamics of politics, the way a small leadership group can pretty much ignore the main caucus of the party and run what happens. It is a very detailed picture of how it goes. The point I am getting at is quite apart from Don Brash there are a lot of other people who need to be held accountable for their actions. And so what I think happened was is that they thought if they lean on Brash to leave quickly then it might distract off other peoples’ accountability.

Well that certainly has seemed to be the case.
Ahh no. I wouldn’t count on that.