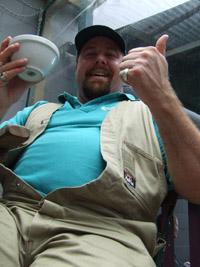 Australia has squeezed out yet another minor cinematic masterpiece in the form of Kenny, a movie styled as a fly on the wall documentary that follows the exploits of the titular character who manages a portaloo company, Splashdown (which actually exists and largely funded the movie) as he negotiates between irate and ungrateful ‘customers’, his selfish ex-wife, hectoring father and the smell in one tank “that will outlast religion”. The movie is produced by the brothers Jacobsen, one of whom, Shane, is also a stand up comedian and the star of the show. Frank got to catch up with this larger than life man (who would only talk in character as Kenny) for a wee yarn about coffee and mud biscuits…

Do they not have them where you’re from?
They’re a bit tight over there I think.

I thought Melbourne was the queen of lattes?
They don’t serve them this big. We’re getting ripped off or so I have near discovered.
You guys are doing it right, we’re doing it wrong. Good coffee over here too.
I’ve had about 300 in a week and a half. I’d rattle like a snake.

You must be sick of wearing that uniform on your holiday in NZ?
It’s not exactly a holiday. But nah mate, it’s comfortable - better than putting a suit on.

What are the characteristics?
It’s about viscosity. Just cause you’re a racing car driver doesn’t mean you know how to make fuel. I’m not necessarily an expert on the mud biscuits but I’ve seen enough to know what’s going on. But if I’m looking at it all day then I’m not working then am I? And if you can see it, then I’m not really doing my job then am I? If you go into surgery and you wake up and your heart was sitting on your guts, you’d go ‘he’s not very good at his job’. You want to see can see the scar but not the organs. 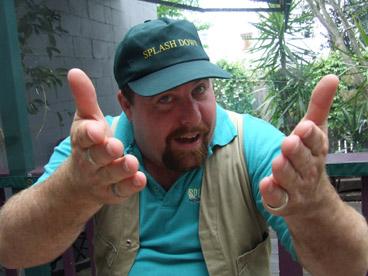 Not afraid to get his hands dirty, Shane digs deep to play a portly prince of poo.

So you gave up your chance for promotion in the film? You wanted to hang with your mates?
That’s all of us isn’t it? The only time I sit at a desk is when I’m stuck in a police station talking my way out of a speeding fine. That’s the only time I expect to be stuck behind a desk. Nah I don’t want to trade working outdoors with a bunch of mates for four walls.

The way I look at it, you never judge a book by its cover. The important thing is that if you are a book that is being judged wrongly it doesn’t change the contents of the story. If someone judged you wrongly you just don’t turn the page for them.

We all snap eventually. I have my ways of venting. I’ve learnt to cope with them - I was married you know.

You do a bit of boxing don’t ya?
I’ve been doing a bit of boxing since I was a kid. There are not many people on the earth who want to fight. There are a few that might… The fact is you can get out of it. Is it worth it for a difference of opinion over someone you have met for eight seconds? 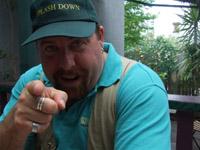 You shouldn’t hit any kids who are younger than you and the fact is that if they’re bigger than you they probably don’t want to fight you anyway. So if you narrow it down there are not that many people to get in a blue with. Everyone come out the loser. Because you hurt yourself.

How are you finding all this attention? Is it more than you are use to back home?
Oh yeah. The attention I’ve been getting since the film has been overwhelming; no one has ever really taken any interest in me before. I can guarantee you that.

I’m not exactly Mickey Mouse when people find that I put my hand down a bog. Like I say, it’s not about being a celebrity or fame. Those words are too big for me, it doesn’t sit right with me but I’ve had a recognized hit. The fact that I’ve built a veranda over the fun park… I’m a bit bulky in the front end - I’m hard to miss I guess.

But Australia has been quite overwhelming. Because the film has done so unbelievably well over there. It’s still going. Three months over there and it’s not coming off.

Still around the top is it?
Been in the top ten or something since it’s been in there. Beat Chopper, Mad Max…
And all those films that I love.

Well it’s been compared to The Castle hasn’t it?
It’s been in the top ten but yeah it doesn’t really compare to The Castle. I sound like a donkey standing next to Phar Lap when you say that. It’s a bit topical on race day. But they’re actors, real actors. And they are good films you know. It’s like comparing a dove to a fighter plane.