Have We Met? The Art of Role-play

In your favourite ..erm...movies, the pizza delivery guy and photocopy fix-it dude always seem to be getting all the action. Baffled? It’s because women love a man in uniform... no matter how much authority is associated with his particular threads. Below we highlight some of our favourite scenarios to bring costume and role-play into the bedroom. 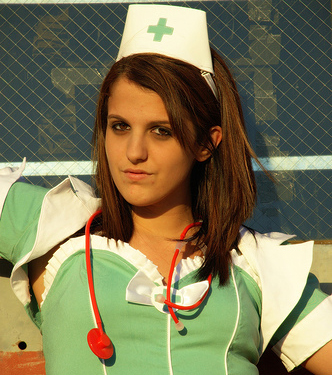 This one is a staple. Firstly, because Britney has engrained the school uniform into the male sexual psyche worldwide. Secondly, it is a naughty turn-on to re-enact something that is a social taboo.  Costumes usually involve a plaid skirt or dress for her, a shirt tucked into a pair of shorts for him...all dependent on who is the teacher and who is the student. Possible scenarios could be an after class tutorial session with an emphasis on sexual education.  Or a failing student willing to do anything to get extra credits.

Channel the McDreamy in you and show your partner your exemplary bedside manner. There’s not a single woman I know who hasn’t had a crush on a doctor at some stage...fictional or otherwise. If you can score yourself some scrubs, that’ll help the authenticity of the scenario. Or you might have to resort to wearing nothing but a stethoscope. Focus this scenario on having her show you where it hurts and then you can do whatever you like to make each sore spot feel better. And what if insurance doesn’t cover the appointment? I’m sure the patient can work something out for payment.

Imagine it. You catch her speeding and she has to do everything she can to make it up to your... long arm of the law. In this game of role-play, the key themes are power and punishment. Whoever plays police officer is the one who decides whether or not the law-breaker gets redeemed for their bad behaviour. It’s more than possible that a strip search will be required. Police costumes are relatively easy to come across and the handcuffs come in useful long after you’ve finished acting.

Whether she’s pretending to be Demi in Striptease or you’re taking your inspiration from Danny De Vito in that episode of Friends...stripping scenarios are a great way to make undressing last longer than usual. This scenario is also a great one for utilising props. Set up the bedroom with a good sound system, a chair and some 5 dollar bills and let the gyrating begin.

If you've never engaged in this activity before, it might seem a little silly at first. But remain straight-faced and really commit to it and you might find you’re really enjoying yourselves. Because there's something about the guise of being in character that allows couples to open their mind to things they might not have considered before.